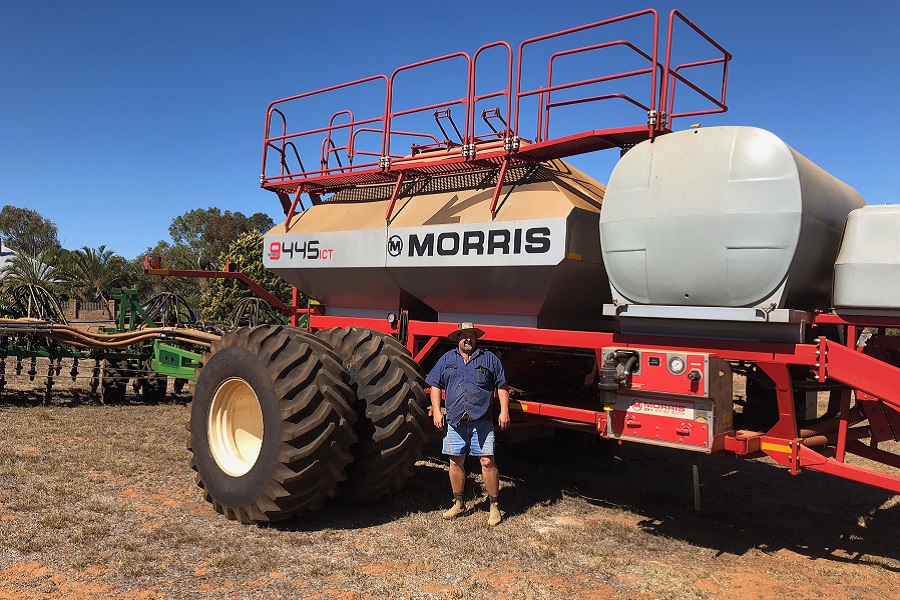 Brad Wilson, Farm Manager at the KLK Farms property at Northampton in WA, with the Morris 9445 air cart that is fitted with Input Control Technology (ICT). The system incorporates five ICT sections across the seeding bar.

FRUSTRATED with overlap resulting in wasted crop inputs, Input Control Technology (ICT) has proven to be a wise investment for a large farming operation in Northampton.

Brad Wilson is the Farm Manager for KLK Farms’ Northampton property, where he oversees a cropping program of 12,500 hectares, largely comprising wheat and canola, and runs a small number of cattle.

The air carts have two 7000-litre tanks and a 5000L tank used for Flexi-N fertiliser, with the ICT-fitted cart used with the 15m DBS bar, incorporating five ICT sections across the bar.

According to Brad, half of the property is on open, yellow sandplain and the other half is heavy, undulating rocky country, which has been the most challenging for overlap.

He said they had suspected it was an issue, but had it confirmed when similar section control technology used during spraying highlighted that the hectares sprayed was significantly different to hectares seeded.

To combat the problem, last season they took delivery of a new Morris 9445 air cart fitted with ICT from McIntosh & Son at Geraldton.

“We recognised that we had issues with overlap and over-seeding on the undulating, odd-shaped paddocks on the heavy country,” Brad said.

“There’s a lot of rock patches, bushes and creek lines and while we use the smaller bar for that country, it was still a problem.

“In that tight country, the overlap was well above 10 per cent and when you factor in Flexi-N and fungicides on top of seed and fertiliser, it becomes quite a significant cost.”

The ICT works via GPS and the new Topcon X35 controller with the Morris carts, using the gear drive system for the metering wheels to quickly engage or disengage, allowing instantaneous shut-off.

It runs individual metering wheels that can stop product immediately, however, the system remains primed with product and as soon as it re-engages, it is back in the air stream.

The new Topcon X35 also allows users to manage and control applications via mobile devices such as tablets and smartphones. The app and bluetooth connectivity provides a mirrored view of the in-cab monitor, allowing calibration of the air cart without having to return to the cab to enter data.

While last year was their first with ICT, Brad said there had been an immediate impact and he estimated they would be saving 10pc on their overall input costs.

With the savings, he said they were expecting to recoup their investment costs after just two seasons.

“It’s certainly helped us out, because we had a lot of issues running out of seed wheat all the time. We found we were always about 10 tonnes short.’’

“When you work it out on the total area it mounts up, over 6000ha, and that’s a lot of inputs.

“Input costs are so huge these days – you can’t afford to be overlapping like that.”

Finding experienced casual staff for peak times is also a big problem for Brad, so he said they were having to rely even more on technology.

They have up to four permanent full-time workers, but extra casual staff are critical during seeding and harvest.

He said the beauty with ICT was that once it was set up, it was relatively simple to use.

“That’s exactly why these systems need to be simple. We really struggle to get experienced staff these days,” he said.

“We’re trying to invest in this type of technology because it will help us in the long run. It takes a lot of the human error out of it.

“We haven’t had the misses that we’ve had with the other two machines, because ultimately those misses happen because the driver has forgotten to push a button, but the ICT unit they don’t even have to touch.

“Input costs are not going to go down, so we have to find ways of being more efficient and this is one of those ways,’’ Brad said.