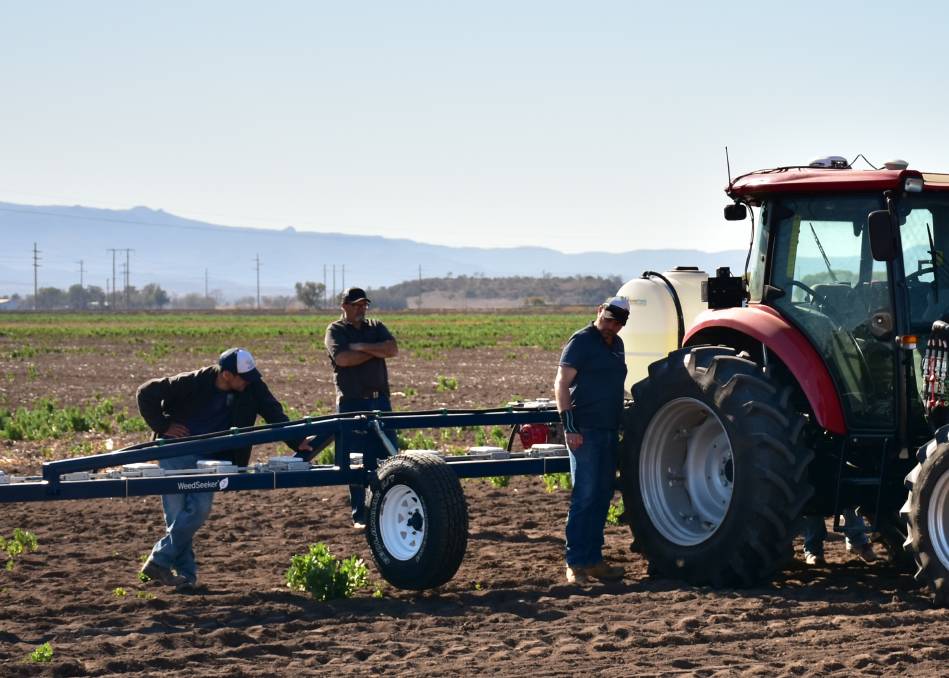 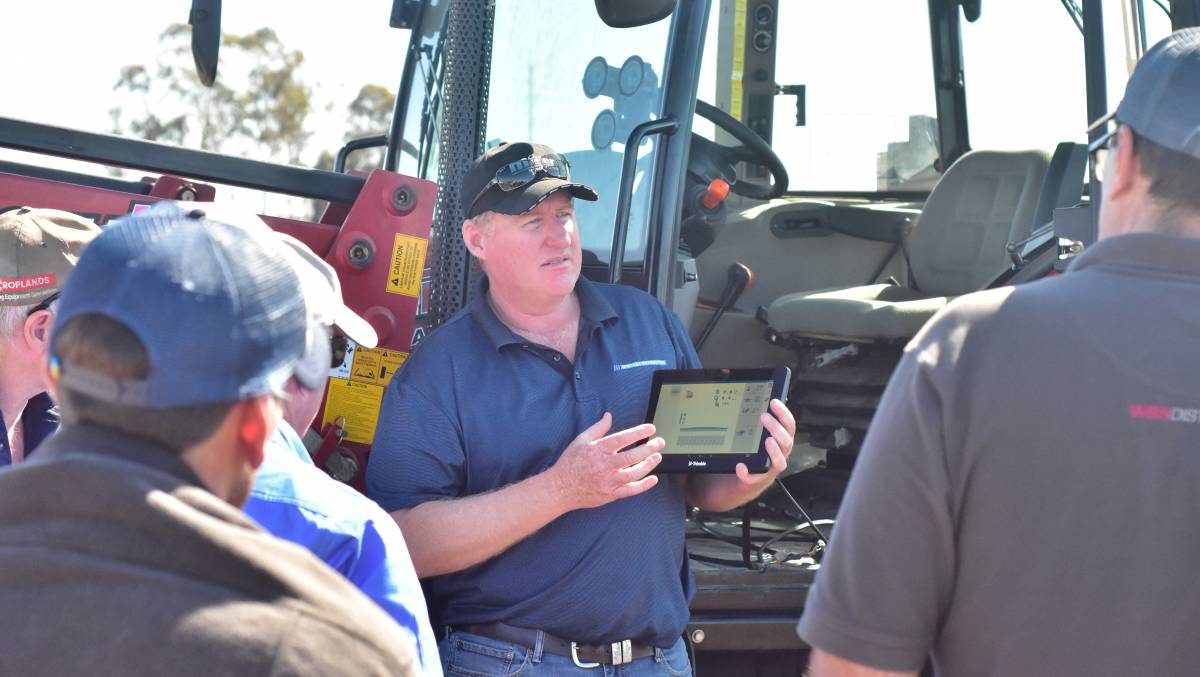 Scott Jameson, McIntosh Distribution, pictured discussing the ISO capability and look of the WeedSeeker 2 platform on screens. It can integrate with growers' existing systems. 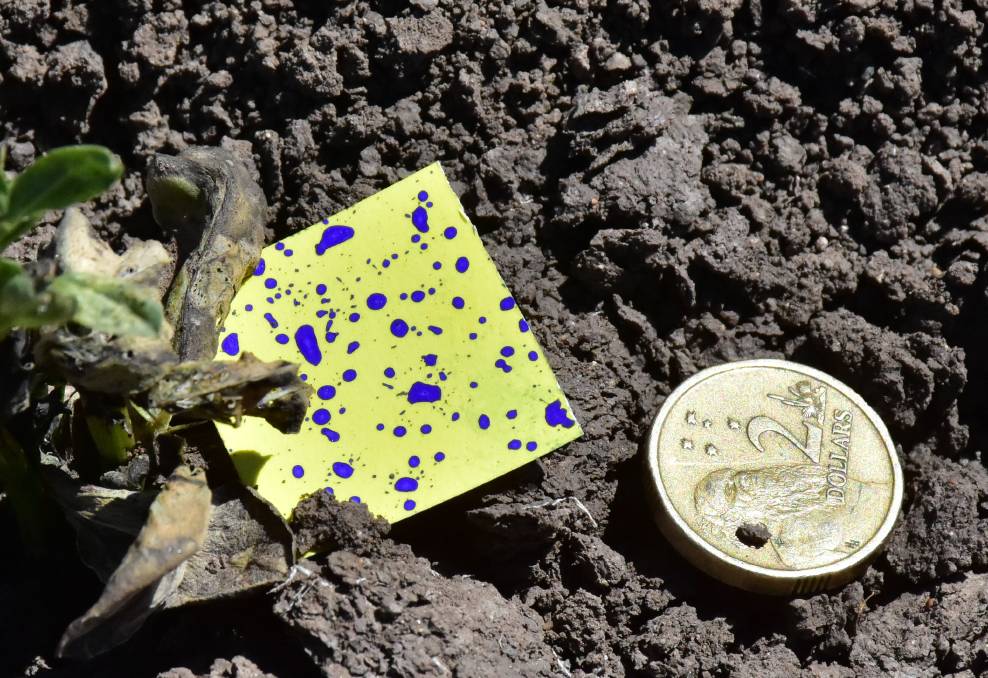 Water sensitive paper was used with the WeedSeeker 2 demonstrations to highlight the small weed sizes that can be targeted by the system, in this case despite not operating at maximum sensitivity.

THE launch of the new generation WeedSeeker 2 spot sprayer from Trimble has quickly captured interest across the broadacre industry, with growers from Queensland through to South Australia recently converging on New South Wales to attend a series of demonstrations with the system.

The paddock demonstrations were coordinated by national distributor, McIntosh Distribution, at Narrabri over several days and highlighted all the new developments and benefits with the latest system.

Growers attended the events from as far as Dalby in Queensland and from the Nyngan, Dubbo and Forbes areas in NSW, while several SA growers on a visit to a dealer in the State also took the opportunity to view a demonstration. Further demonstrations are set to be held in the Griffith area and northern regions from early October, while events in other States, including Western Australia, will be held soon.

Scott Jameson with McIntosh Distribution said water sensitive paper was used with the demonstrations to highlight the small weed sizes that could be targeted by the WeedSeeker 2, also despite not operating at its maximum sensitivity.

Scott said the lighter, more compact design of the latest WeedSeeker 2 units was one of its leading features, helping to reduce the overall weight of the system on spray booms.

He said the new sensors were 50 per cent lighter and their spacing along booms had widened from 38 centimetres to 50cm, effectively reducing sensor numbers by 30pc.

“This has further reduced the weight on booms and the components required for fitment. The lighter sensors have also opened up the opportunity for the system to be used on wider platforms,’’ Scott said.

Compared with other similar products that have sensors spaced at every metre along booms, the 50cm spacing also provides for double the resolution when targeting weeds, which is especially valuable in situations with heavy stubble burdens.

Scott said a new quick-attach bracket kit allowed quick removal of the sensors from booms and an easy return to other spraying activity.

“Unlike alternate systems, the WeedSeeker 2 also does not need to be fitted to ground-following booms. It suits most existing sprayers.’’

Scott said the latest system could now operate on most ISO-capable screens, again unlike other spot sprayers.

“Rather than having to put another controller in the cab, WeedSeeker 2 integrates with existing systems, allowing cost savings for growers.’’

Another feature that captured significant interest was the ability for the WeedSeeker 2 to run section control.

“Growers can have up to 18 individual sections at whatever size they want. They can manipulate the number of sensors per section to suit the type of program they are running, like tramlining,’’ Scott said.

“Weed mapping provided with the system also maps the weed presence in paddocks. A weed map ISO XML file can then be processed in desktop mapping software, effectively helping growers with their resistance management. It shows where sensors have been turning on and off and, therefore, where weeds are more dominant. Growers can then monitor resistant populations and possibly treat areas differently in future to help fight resistance.’’

He said the self-learning feature was one of the big attractions for growers, along with the ISO capability and lighter weight of the WeedSeeker 2 sensors.

“They were very pleased with what they saw during the demonstrations.’’

Scott said despite the dry conditions in northern NSW, spraying was still being carried out, particularly in cases where storm events sparked weed germinations, and spot spraying remained a hot topic in these situations.