Thumbs Up For Seed Destructor Upgrades 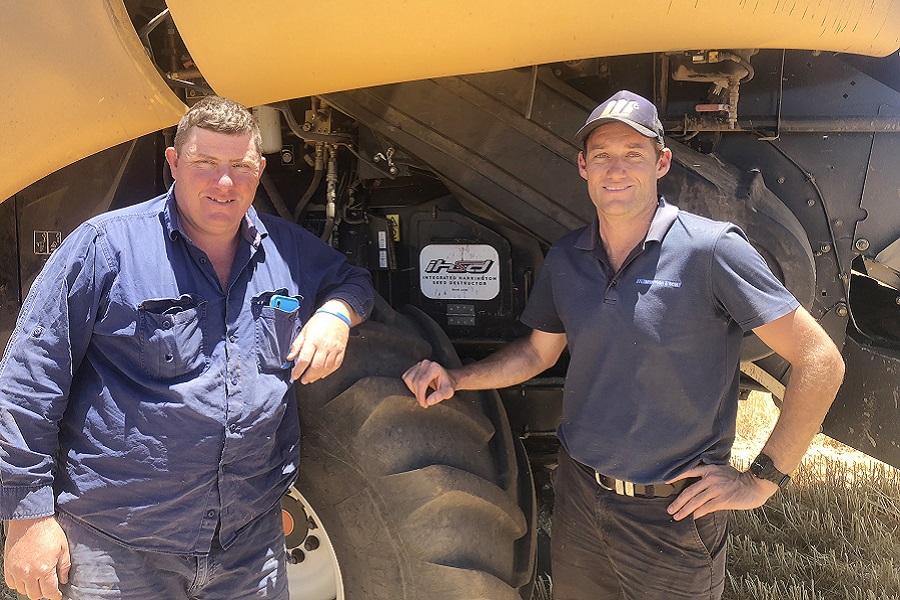 Latest developments with harvester-integrated weed seed destructor technology are being given the thumbs up by growers this harvest.

Following ongoing consultation with growers, recent upgrades to the Integrated Harrington Seed Destructor (iHSD) coordinated by SKF Engineering and DeBruin Engineering included a wider mill, a cooler relocation to assist with oil cooling and a total redesign of the bearings and housing.

Invented by Western Australian grower Ray Harrington, the iHSD was developed by UniSA with funding and support from GRDC. It comprises two hydraulically-driven cage mills retro-fitted to the rear of harvesters, just below the sieves, and has continued to record up to 99 per cent kill rates of targeted weed seeds. This, in turn, reduces herbicide resistant weeds, allowing for more targeted and efficient chemical control in following seasons.

Johnny Inferrera with national iHSD distributor, McIntosh Distribution, said since the start of harvest there had been improvements with the running of the systems.

“The recent upgrades were designed to improve the reliability and durability of the machines, and that’s exactly what has been achieved,’’ Johnny said.

“With the right header set-up, the mill wear has been very good and oil temperatures have been within the parameters we were seeking. On the hot days it has remained well within the guidelines, which we were very happy with.’’

At Moonyoonooka in WA, Warren Treasure is operating an iHSD with the latest upgrades in the family’s new harvester, a New Holland CR 10.90.

Warren, his brother Daniel and father Quentin are in the middle of one of their best ever grain harvests, putting the iHSD to the test in some of the bulkiest crops they have produced.

“The canola averaged about 2 tonnes per hectare, the barley was just under 5t/ha and the wheat we have done so far is sitting around 4t/ha,’’ Warren said.

“Especially this year with the crops so thick, we have had a higher amount of material going through the header, but the seed destructor has worked very well, with no issues at all.’’

“The shape of the blades has changed and the mills can now handle a higher capacity.’’

He said added power with the new header, after trading up from a New Holland 8.90, had also been a major benefit.

Last year, the Treasures did encounter problems with the oil cooler, but that had been eliminated this harvest with its new positioning as part of the upgrades.

“It was too low last year and it sucked the chaff in, but now it’s on a stand up in clean air. Now we virtually don’t look at it until the next morning,’’ Warren said.

“The bearings are also remaining stable and everything is staying tight.’’

The family crops most of its 2400-hectare ‘Appa Springs’ property to wheat, barley, canola, lupins and some hay. The main rotation includes two years of cereal followed by an oilseed or pulse break crop.

Warren said they had continued to see fewer volunteers following the use of the iHSD, although after limited knockdown herbicide use the last two seasons, weed pressure was high this year due to the residual seed bank and favourable season.

“I would hate to think, if we didn’t have the seed destructor this year, what it would be like next season given the amount of weeds that are around,’’ he said.

Radish and ryegrass are the main weed problems at ‘Appa Springs’ and Warren said their key aim with the iHSD was to reduce their reliance on chemicals and get control of weeds before they developed resistance.

For further information on the iHSD and its vital role in reducing herbicide resistance and improving returns from cropping investment, growers can contact their local McIntosh & Son dealer.