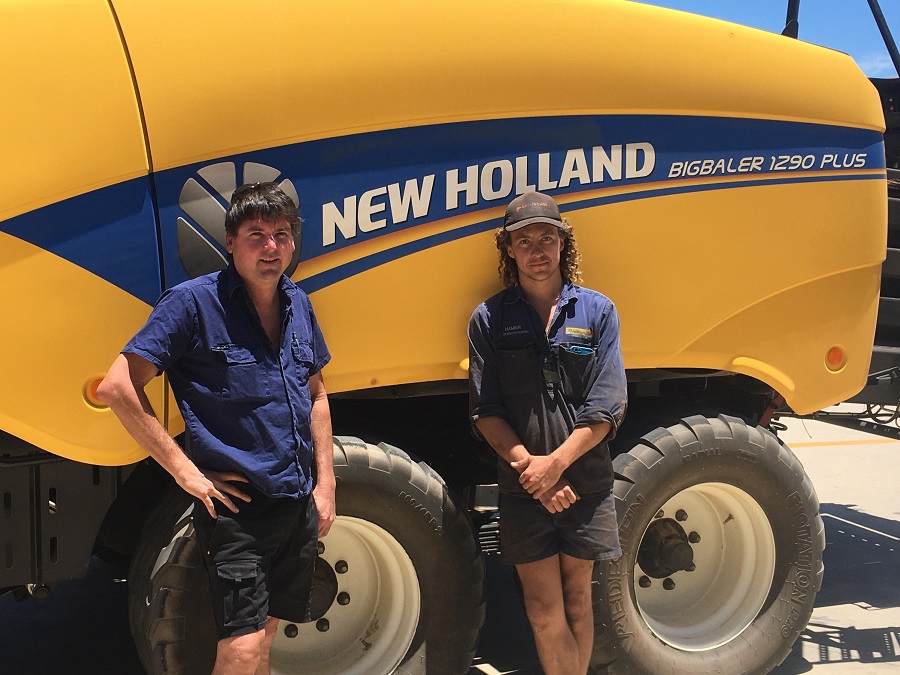 Geraldton area hay contractor Michael Patience with Hamish Pulbrook, McIntosh & Son Geraldton, and his New Holland BigBaler 1290 PLUS. Michael said service and support was number one when it came to his decision on purchasing a new baler.

THEY say a new machine is only as good as the service and backup that comes with it and it was a strong relationship with a service team that convinced Geraldton area hay contractor Michael Patience to upgrade to a new baler last season.

A member of the enterprising Patience family that also runs Patience Bulk Haulage and other businesses in the region, Michael operates Patience Sandland Pty Ltd, the largest landscape supplier in the Mid West, as well as the hay contracting and supply business.

Based at Walkaway, Michael said he purchased his first baler, a New Holland BigBaler, from McIntosh & Son at Geraldton about 12 years ago to help with the manufacture of mulches for the landscape supply business.

Today, only about 10 per cent of the straw he bales goes back into the business. In addition to mulches, it also features in some of the garden mix blends after full composting and pasteurisation. Michael also supplies straw throughout the Mid West region and to producers in the northern pastoral industry.

In late 2015, Michael traded his first baler for a New Holland BigBaler 1290 and last year he upgraded to the BigBaler 1290 PLUS high density baler.

“I did look at other balers, but the service and support took me back to McIntosh & Son,’’ Michael said.

“Everyone is happy until something goes wrong, and then the dealer and servicing can be too far away. Service and support is number one.’’

He earlier used the workshop with the haulage business for servicing, but has since relied on the McIntosh & Son service team.

“McIntosh & Son provides training to its employees, which is integral because we have then got service support and that’s what it’s about.’’

“They sent Hamish (Pulbrook, service technician) to Victoria to learn about the latest BigBaler. For only one of these balers in the area so far, they sent him to Victoria – and I know about the costs of training because we employed a couple of hundred in the haulage business and I was involved with a lot of training.

“That says everything about McIntosh & Son – for one baler. It speaks volumes. They wouldn’t have made the money out of the baler to cover the training. That service and support keeps you coming back.’’

Michael said the servicing on his previous New Holland BigBaler, with Chris Gould, Scott Nevill and also more recently with Hamish at the dealership, always had been extremely thorough.

“I worked in with the workshop. When they were a little quieter around the end of July, we would always do a post-season service so we were ready for the next season.’’

“I would go through everything with them and we would replace anything that was needed.

“The servicing is exceptional. There is a checklist provided by New Holland and they go through it and check everything. Mark Bradley in parts is also very good. They try hard for you – and that’s all you can ask for. It’s how you’re backed up that counts.’’

Michael uses a John Deere tractor to pull the baler and he said both the tractor and baler were serviced by the McIntosh & Son team.

McIntosh & Son Geraldton Branch Manager Craig Ajduk said the business had invested heavily in staff training over the past two years in an effort to build a strong service culture.

“All service staff, from the apprentices through to the service manager, undertake a minimum of two training courses a year in Perth and/or interstate,’’ Craig said.

“You have to invest to get something back and we are keen on working with the right people who take pride in what they do. The investment is significant and ongoing, but necessary.

“We have focused on developing a team that suits our service culture, and it is growing.’’

McIntosh & Son also has applied to have its Katanning and Wongan Hills branches registered as regional training organisations (RTOs), with the aim of tailoring training to specifically include those products and services that are a priority for its customer base.

Michael said with the work being done on the recently traded BigBaler, the team convinced him to look at the deal for the latest model. The dealership also sold the trade-in soon after.

The New Holland BigBaler PLUS models have an 80cm longer baler chamber and deliver up to 10pc higher bale density.

“This latest model has got everything on it, with rear camera, on-board weigh scales and on-board moisture meter,’’ Michael said.

“The best feature is the electronic bale length control. With the other baler, the bales could be one or two inches longer or shorter – and they need to be spot-on when loading trucks. The major complaint from customers was: ‘sort the baler out so the lengths are the same to load the dropdecks’.

“With the new baler, once I’ve set it and worked it out, every bale comes out the same length – and I can adjust it a little bit in the cab. I can manage the weight, the pressure and I can even tie a bale off in the cab.

“The pickup is also exceptional, and the new one has a plastic finger guard, rather than steel, so it flexes if it hits anything,’’ he said.