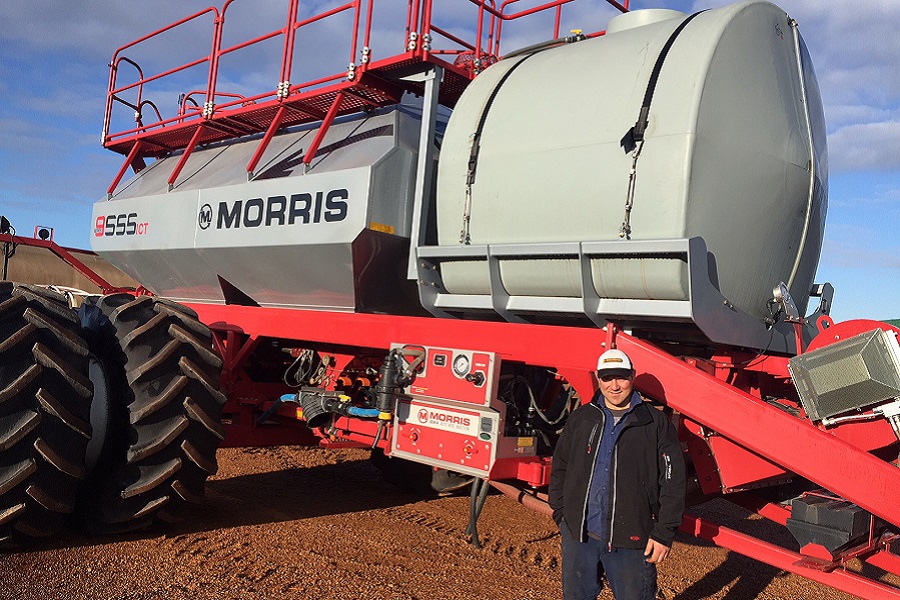 According to Jerome Candeloro, who farms at Toodyay in Western Australia with his brothers, Dion and Aaron, along with their father, Joe, it had been a technology they had been watching closely since adopting spraying sectional control almost 10 years ago.

The family operates a total cropping enterprise of 12,000-hectares across the Toodyay, Goomalling and Victoria Plains shires, in a program comprising wheat, barley, canola and lupins.

The Candeloros band nitrogen with fertiliser or just below, a method they have been using for close to nine years.

Jerome said it encouraged early crop vigour, while freeing up time for a second nitrogen application shortly after sowing.

Just prior to seeding last year, the family took delivery of their new Morris 9555 air cart, which featured a 7000L integrated liquid tank and ICT, from McIntosh & Son at Wongan Hills.

“We had been watching Morris closely for the last three years, waiting for the new 9 Series model to come out, so when it was released and it had the option of ICT as well as the integrated liquid tank, fitted by McIntosh Distribution in Redcliffe, it pretty much sold us,” Jerome said.

“Considering where we’re farming, particularly in the Toodyay shire, there’s quite a bit of overlap – we’ve noticed up to 10% at times.

“With the wider machines coming into headlands that aren’t square and around trees, you can see it overlapping.

“We’ve had sectional control on the boomsprays for about 10 years and we’ve noticed a fair saving, so even back then it would be good to adopt the same technology on seeding rigs – but of course it wasn’t available at the time.”

The ICT works via GPS and the new Topcon X35 controller with the Morris carts, using the gear drive system for the metering wheels to quickly engage or disengage, allowing instantaneous shut-off. It runs individual metering wheels that can stop product immediately, however, the system remains primed with product and as soon as it re-engages, it is back in the air stream.

The new Topcon X35 also allows users to manage and control applications via mobile devices such as tablets and smartphones. The app and bluetooth connectivity provides a mirrored view of the in-cab monitor, allowing calibration of the air cart without having to return to the cab to enter data.

While Jerome said the initial set-up of the ICT took some time and patience, he said the service and support they received from their dealership was critical.

“It was a big learning curve, but we had excellent service from McIntosh & Son at Wongan Hills and once we had set all the rates and latency settings, we became more confident with it – it was a no brainer,” he said.

“The first half of the season was tough, because we had a bit of a false start, particularly with canola and the crops weren’t coming out of the ground, so we were stressing not knowing if it was due to the ICT not working or if it was the unseasonal dry start.

“Then as the crops germinated, we could see quite clearly the pattern of the ICT and knew it was working and from there, we knew we could trust it.

“It’s all too easy to turn it off with the flick of a switch if things get too hard during the pressures of seeding. But that’s not the objective – you need to get the full benefit of your investment and the technology.

“By the end of the season, we were 100% happy with it and on the paddocks we’re using just that bar, the hectares are comparable with the sectional control on the boomspray.

“The savings could be up to 10% in those areas and as a total cost saving, it’s all your inputs and that’s significant – granular and liquid fertiliser, seed, plus your hybrid canola seed. It’s worth quite a lot of money.”

Jerome said they were seriously considering switching the other two air carts to Morris air carts with ICT, when the time comes to upgrade.

“I don’t think it will be long before the technology is standard across all brands, but even without ICT, in our view the Morris air cart is still quite a superior product."

“As a full package between Morris and Topcon, it’s a great partnership.”