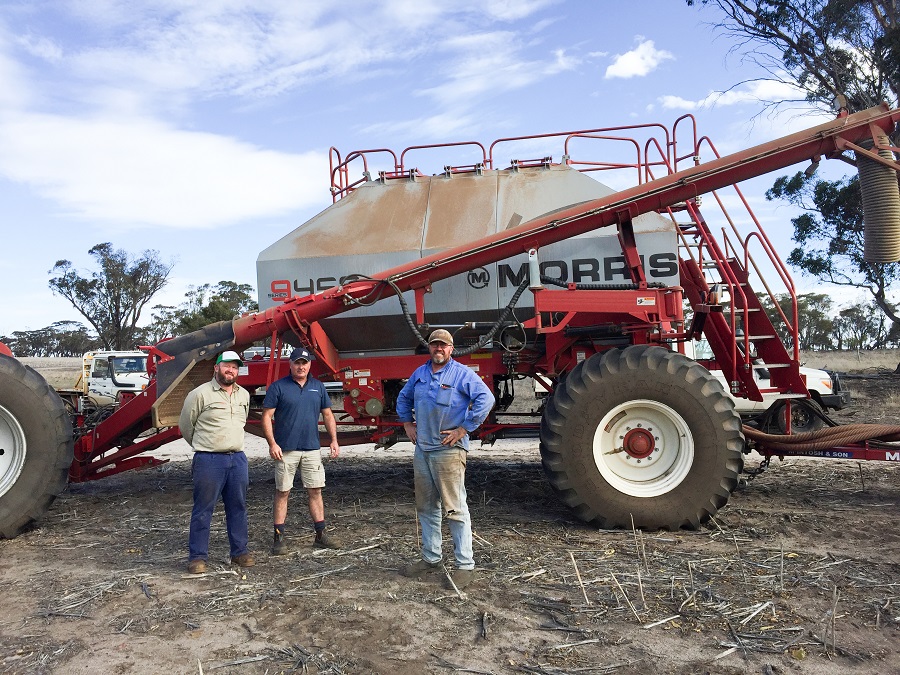 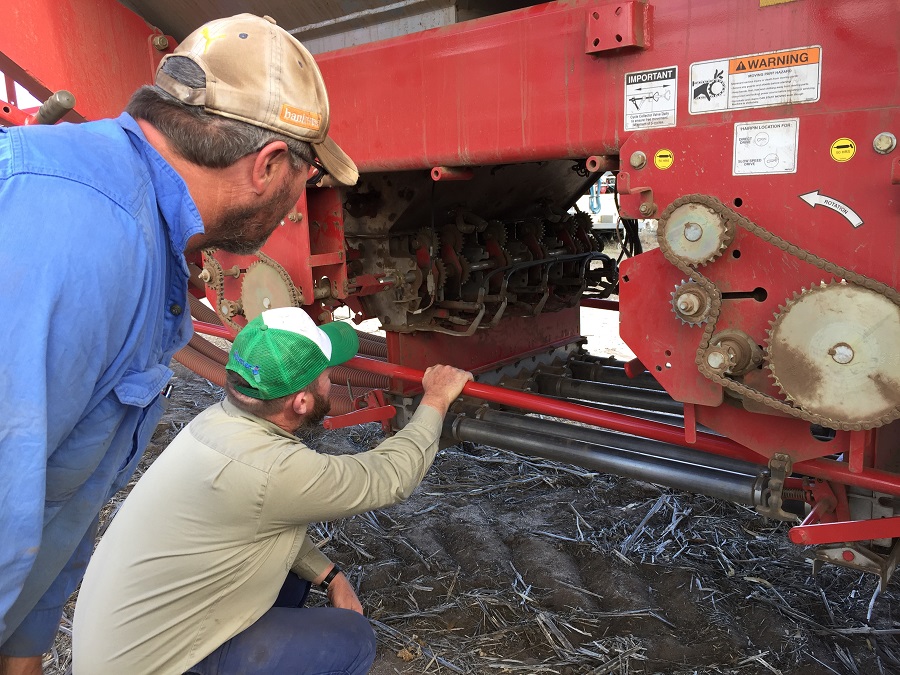 The Moir family at Amelup are already achieving 5% crop input savings since moving to section control with their seeding system last year and is now targeting further significant efficiencies ahead.

This season they have also hitched it to a new Morris Quantum air drill set on 25cm (10-inch) tyne spacings after challenging conditions last autumn made it hard work for their previous Concept 2000 bar.

Darren and his husband Nigel, together with parents Greg and Kerry, sister Michelle and her husband Paul Richardson, crop about 4000 hectares to wheat, barley and canola at their ‘Amelup Estate’ property, also with the help of tractor driver Reuben Goodger, who hails from New Zealand. The family also runs Dohne sheep, mating about 2600 ewes.

Located on the edge of the Stirling Range, the undulating country with rock heaps and creeks, including a 100ha paddock that is in about seven separate pieces, prompted the move to Morris ICT for section control seeding.

Incorporating six sections, corresponding with the distributor heads across the Quantum air drill, the ICT eliminates overlap and thereby saves inputs by stopping product flow over the sections that are not required.

The technology works via GPS and the Topcon X35 controller with the Morris carts, using the gear drive system for the metering wheels to quickly engage or disengage, allowing instantaneous shut-off. It runs individual metering wheels that can stop product immediately, however, the system remains primed with product and as soon as it re-engages, it is back in the air stream.

With the option of ‘Xtend’ on the Topcon controller, users also can now control applications and calibration via mobile devices, such as tablets and smartphones, without having to return to the cab to enter data.

Darren said potassium deficiency also was becoming a limiting factor in parts of the property and the family planned to use Muriate of Potash in the third bin of the air cart for “patching out’’ areas via the variable rate technology linked to paddock maps. This will save a pass with their variable rate spreader.

“Near the mountains, our block is more uniform, but at our place near Amelup, about 20% in each paddock needs potash,’’ Darren said.

“With the variable soil types, it requires about a 15 unit adjustment (in potassium), so we will map things out and the bin will turn on and off, applying about 30 kg/ha of MoP where needed.’’

Limited rainfall prior to seeding last season and some tough soils, including heavy cracking clays, put the Concept 2000 bar to the test and after viewing a demonstration of the new Morris Quantum air drill near Kondinin, the Moirs decided to add it to the ICT cart for this year.

“We have got good weed control and we don’t hold back – we will put it (the cropping program) all in and wait for rain,’’ Darren said.

He said they were in a frost prone area however, and having a smaller 12-metre (40-foot) air drill helped to spread the planting time.

Darren said the previous Concept bar with hydraulic tynes was set on 500kg of breakout and would “ride up’’, whereas the Quantum air drill maintained excellent depth control.

“It (the Quantum) just sits there. It’s putting the seed right where we want it and it’s finding moisture.’’

“We have been really impressed with the depth control. With the cereals we have been dropping the seed at 2.5cm and in the canola it was all at 1.5cm.’’

Darren said with the new technology, it was amazing how much steel had been removed from the frame.

“There are also no tyres inside the frame, so that helps with trash control. All the tyres are the same, so it’s easy to switch them out as well,’’ he said.

The 5.4m transport width was another bonus, as the rig had to be moved between properties, through the mountains along Chester Pass Road, which was quite narrow in some parts.

Darren said their local Morris dealer, McIntosh & Son at Albany and Katanning, had provided great support for their Morris equipment and set-up of the Quantum air drill in time for seeding this year.

He said good rainfall particularly in March had provided for more favourable seeding conditions this year, with most of their canola having emerged and the cereals emerging well.

Further demonstrations of the new Morris Quantum air drill and carts with ICT are being held across the agricultural region during seeding. Growers interested in attending an event can contact their nearest McIntosh & Son dealer.