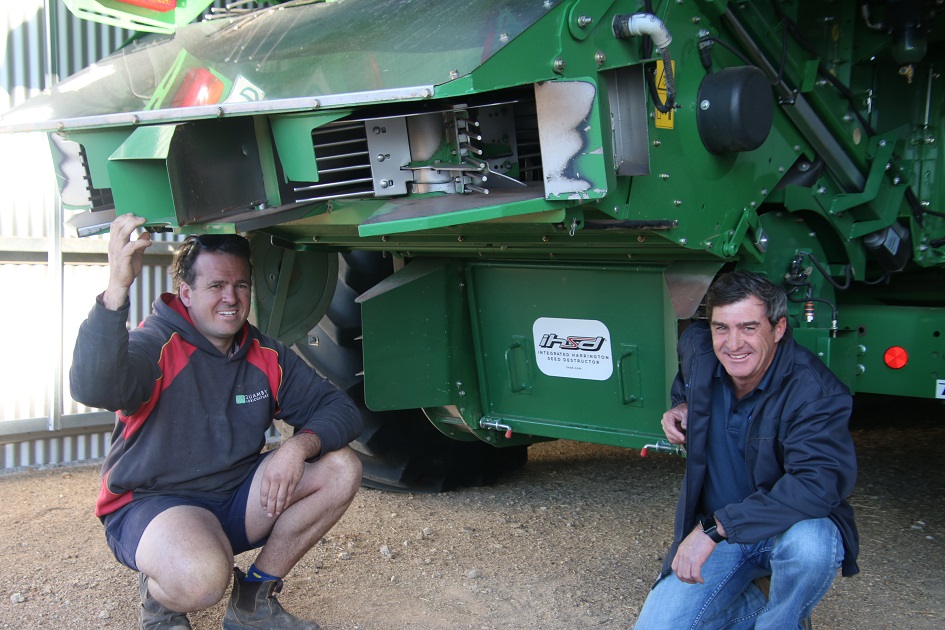 Ryegrass and wild oats, including herbicide-resistant populations, continue to be a problem for the Days at Lockhart in New South Wales. They have conducted windrow burning to help control weed seeds, but prefer to maintain their stubbles. They have also fitted a swather sprayer to their canola windrower with good results. Last harvest, they tried a new option…

THE Day farming family are always taking steps to reduce the weed burden on their continuously cropped properties north of Lockhart in the New South Wales Riverina region and their latest move has seen the adoption of harvester-integrated weed seed control technology.

Sandy Day said water was the most limiting factor in their cropping enterprise, but weeds were the most costly.

Together with his parents, Trevor and Christine, Sandy and his wife, Morgaine, who have two children, Luna (11) and John (8), grow wheat, barley, canola and vetch over about 2630 hectares of mainly light red loam soils and small areas of black soils.

The land is separated over about five locations and despite experiencing one of the driest seasons last year, it sits in a 300-450-millimetre average annual rainfall zone.

Sandy said following a dry summer as well, they were fortunate to have sown into a full moisture profile for the 2020 season thanks to 170-240mm of rain falling over the properties during an eight to nine-week period.

He said ryegrass and wild oats were the main weed problems, including populations that had developed resistance to certain selective and non-selective herbicides.

Windrow burning has been carried out to help manage the weed seed bank, but the Days prefer to maintain their stubbles.

They decided to fit a swather sprayer to their canola windrower and it achieved good results, limiting the windrow burning only to particularly weedy patches, which they still undertake today if necessary.

The first technology Sandy viewed to control weed seeds during the harvesting process was the tow-behind Harrington Seed Destructor.

“At the time I said to a mate, if this develops into something special, it could be awesome,’’ he said.

Fast-track to last year and he was on the cusp of investing in another harvester-integrated weed seed control system before becoming aware of the latest mechanical-drive, integrated Harrington Seed Destructor (iHSD) with a new vertical mill design.

Invented by WA grower Ray Harrington, the Destructor is designed and manufactured by de Bruin Engineering and distributed nationally by McIntosh Distribution. The core mill technology was developed by UniSA with funding and support from GRDC. The system can be fitted to later model John Deere, Case IH, New Holland and Claas harvesters, with no permanent modifications required.

“We spoke with McIntosh and ended up buying it sight unseen,’’ Sandy said.

“Dad and I are not engineers, but we like building anything and everything, and the Destructor’s simple, robust design impressed us straight away – and it was cheaper.’’

The Seed Destructor is designed to operate at 3000 RPM to optimise mill capacity, with independent testing confirming weed seed kill rates of up to 99 per cent.

“We knew it had been tested for years, which gives you confidence, and it just seemed that the Harrington mills had a lot better capacity. The size of the throat, as I call it, where the material goes down into the mill, is huge,’’ Sandy said.

“Our biggest concern was dealer support, but once we confirmed that with McIntosh, there was never a problem. They want to set up a good dealer network and I like their aggressive approach.

“There are also some other good things with the Destructor coming in the pipeline, so they are an outfit that will look at these things and keep developing.

“There are a few other Destructor machines that have fired-up around the area too, so it will be a good area.’’

The Day’s Seed Destructor was fitted to their harvest contractor’s John Deere S690 header, which spent all it’s time at the family’s properties last harvest and will be offered under an arrangement to other growers in future.

“With the season we had last year, the header was not at capacity, but it had a good test run,’’ Sandy said.

“The crops looked like they could have yielded a bit more and we knew the Seed Destructor would suck a bit more fuel and power with the header.

“It’s extremely user-friendly, requiring very little maintenance. We probably over-checked it compared with what’s needed. Each day it’s a bit of greasing and keeping an eye on the bearings and that’s it – 90pc of the time you forget it’s on there.

“We were expecting a few headaches, but it all ramped-up pretty well.’’

He said other features with the Seed Destructor including a rear hatch that allows easy checking of grain losses and a stone trap to catch any foreign objects coming through the mills were particularly valuable.

“Another reason why we chose it was the stone trap, which was a huge thing. It wasn’t our header for a start and with other people working on it, we didn’t want anything to go through it that could damage the mills.’’

“Being able to do some calibration by checking the grain losses was another big plus and, at the time, competitor machines didn’t have that.’’

In terms of early weed control benefits, Sandy said neighbours already had recognised significantly reduced volunteer numbers in their paddocks this year and they were looking forward to the impact on their ryegrass and wild oat populations in the next two to three seasons.

The Seed Destructors are in limited supply Australia-wide and growers have been encouraged to lock in their “build slot’’ to upgrade their harvesters with the machines at the earliest opportunity for the 2020 harvest.

Producers also can take advantage of the Federal Government’s recently extended $150,000 instant asset write-off under its latest stimulus package to aid their purchases.

Growers interested in further information about the latest Seed Destructor and locking in early orders for next harvest, contact your local McIntosh & Son Dealership.