Reducing Reliance on Chemicals at Carnamah 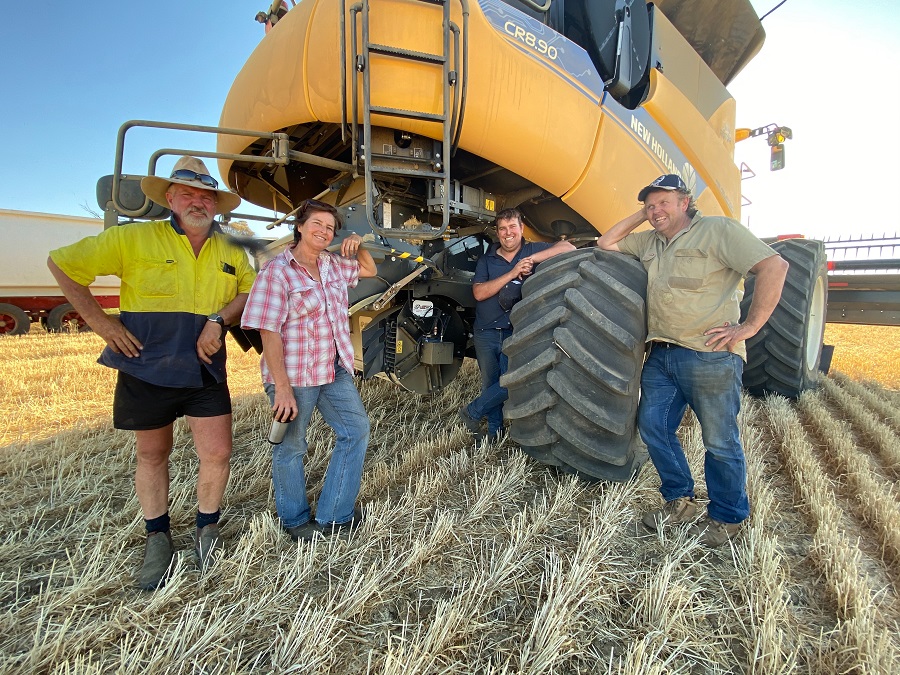 The Drings at Carnamah in Western Australia like to keep things simple and not use too many chemicals, but herbicide resistance and their weed seed bank have been a concern. With the upgrade of their harvester last year, a new option emerged and they took it. An extra bonus is that it saves windrow burning as well – and now they are looking forward to the results.

CHEMICAL resistance is a big concern for Western Australian farmers Roger and Angela Dring at Carnamah, so they take a keen interest in technology that can reduce their reliance.

It was a big factor in their investment in a New Holland CR8.90 header fitted with a Harrington Seed Destructor (iHSD) last year.

Roger and Angela farm at ‘Lindum’, Carnamah, with their three children, Olivia (19), Jackson (17) and Reuben (15). Their 4000-hectare property is 95% cropping, with a small number of sheep and a thriving farm stay business.

“We try and keep it as simple as we can, in terms of not relying too heavily on chemicals and not growing any GM varieties,” Roger said.

“I guess we’re quite conservation-minded when it comes to our farming. Angela, in particular, is quite passionate about that side of the business.”

The Drings purchased their New Holland CR8.90 fitted with the Harrington Seed Destructor from McIntosh & Son at Moora, making the change after a long history of using John Deere headers.

Roger said their farm consultant had recommended they invest in the Harrington Seed Destructor and it was something they had been considering for a while, so when they decided to upgrade the header, adding the Seed Destructor was a “no brainer”.

Invented by WA grower Ray Harrington and developed by UniSA with investment from GRDC, the Harrington Seed Destructor has undergone continuing development in recent years by DeBruin Engineering, together with national distributor, McIntosh Distribution.

The new vertical, mechanical-drive system, which uses the same mill set as the hydraulic version, can be fitted to later model John Deere, Case IH, New Holland and Claas harvesters, with no permanent modifications required.

Despite it not being the greatest season to really test out the header yield-wise, Roger said they were pleased with the overall performance.

“It’s great the way it feeds through the feeder house, plus there’s the advantage of the stone trap mechanism with the Seed Destructor. We thought that was really good,” Roger said.

“Angela spent a lot of time driving the header and she was impressed with how nice and quiet it was in the cab.

“The service we have received from McIntosh & Son has been fantastic. ‘Matty’ Howard’s professional care has been amazing. They’re looking after us so well and that’s what makes a difference.”

Appreciating the quality service they received from their local McIntosh & Son branch, Roger said they also had just purchased a Gessner deep ripper from the company.

The Drings completed 215 hours with their new header and Seed Destructor; and are looking forward to seeing the real results over the coming years.

In the fight to reduce their weed seed bank they had been windrowing for the past 10 years, which had proven time consuming.

“It would normally take a couple of weeks and a lot of late nights. Now that we have the Seed Destructor, that’s a win with saved organic matter, labour and time, not to mention a plus for the environment.

“Hopefully we will be able to pull our chemical usage back, as resistance is a big concern for us. Taking the pressure off chemical can only be a good thing.”

The Seed Destructors are in limited supply Australia-wide and growers have been encouraged to lock in their “build slot’’ to upgrade their harvesters with the machines at the earliest opportunity for the 2020 harvest.

Producers also can take advantage of the Federal Government’s $150,000 instant asset write-off until June 30 under its latest stimulus package to aid their purchases.

Growers interested in further information about the latest system and locking in early orders for next harvest can contact their local McIntosh & Son branch.