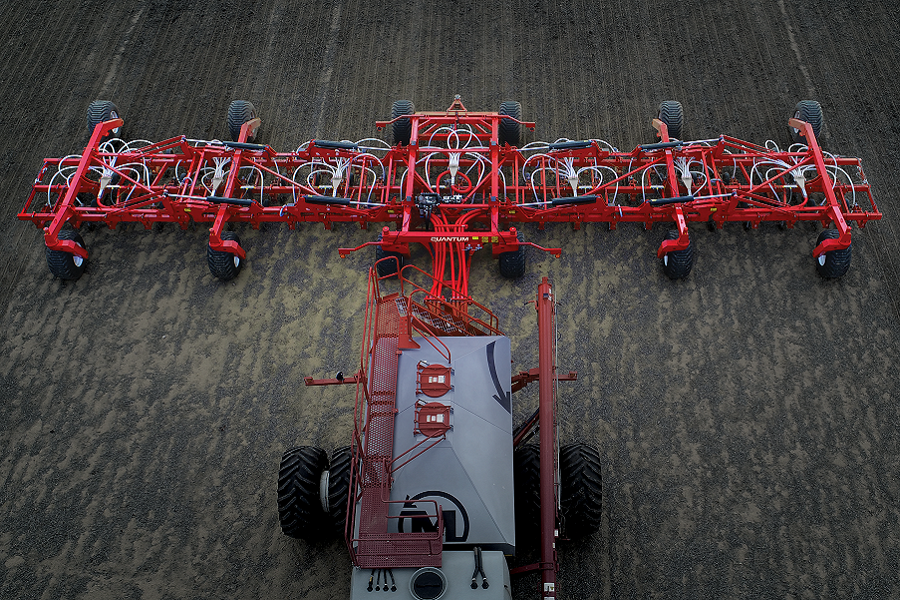 EVERY so often, something comes along that can change the landscape of farming and while revolutionary can be a loosely used term in today’s agricultural industry, it’s a rather apt description for the all-new Morris Quantum air drill.

Cam McIntosh, Director of the national distributor for Morris, McIntosh Distribution, said the new Quantum drill, unveiled this week at the Canada Farm Progress Show at Regina, Saskatchewan, was set to be a “game-changer’’ for the durability of seeding equipment bars across Australia.

He said other key features included:

“In Canada, the Quantum was initially torture tested over 800 hectares of stony country without a fault and so far in Australia this season, it has undergone rigorous testing over nearly 10,000ha with a similar result,’’ Cam said.

“Due to the dry start of the season this year, it was some of the toughest conditions farmers had ever worked tillage into, with absolutely no moisture down at depth, and it worked for them extremely well.

“On 30cm spacings, they were working 10cm deep and seeding at 1.5-2cm, and they were consistently achieving that in a wide variety of conditions.

“Neighbouring farmers who had to stop seeding due to the conditions and viewed the Quantum acknowledged that if they had something similar, they would still have been seeding.’’

“That said, it comes to market built with the same practical, hands-on producer learnings that have been a foundation of our company,’’ Ben said.

“Through innovative design and proprietary manufacturing technology, we have developed an air drill with significantly improved frame strength.”

In addition to the frame technology, the new 10 x 15cm (4 x 6in) tubular frames of the Quantum are connected with chrome pins that are 27% larger than those used on previous machines.

The redesigned heavy-duty hitch uses 20% more steel than previous hitches and is connected to the frame with chrome pins that fit into hardened steel bushings. Plus new, larger stainless-steel divider heads have an increased lifespan as they are less prone to plugging.

“At the end of the day, it’s about performance. The first and most important step in maximising yield potential is rapid, uniform crop emergence. Poorly established crops never achieve their full yield potential,’’ Garth said.

Adapted from the industry-leading trash flow design of the Morris C2 Contour, the Quantum raises the lowest catch point on the opener by 60% and reclines the opener shank 12 degrees, allowing farmers to plant in taller stubble without sacrificing seed placement precision.

“Eliminating bunching and piles of crop residue collecting on the shank of the opener is important during shallow seeding,” Garth said.

“These residue bunches interfere with the flow of soil around the opener and filling the furrow before packing, resulting in uncovered seed and spotty germination.”

Ben said as a global manufacturer of agricultural seeding and hay-hauling equipment now entering its 90th year of business, Morris remained committed to serving the needs of farmers and it embraced continuous improvement, diversity and automation.

“At Morris, we realise that we must adjust to the new realities of modern, global agriculture. Continuous improvement and diversity of thinking leads to better outcomes. This approach to business is how we are able to deliver on our commitments and offer exciting, state-of-the-art equipment like the Quantum drill,’’ he said.

For further information on some of the latest developments from Morris, farmers can visit www.innovationunearthed.com