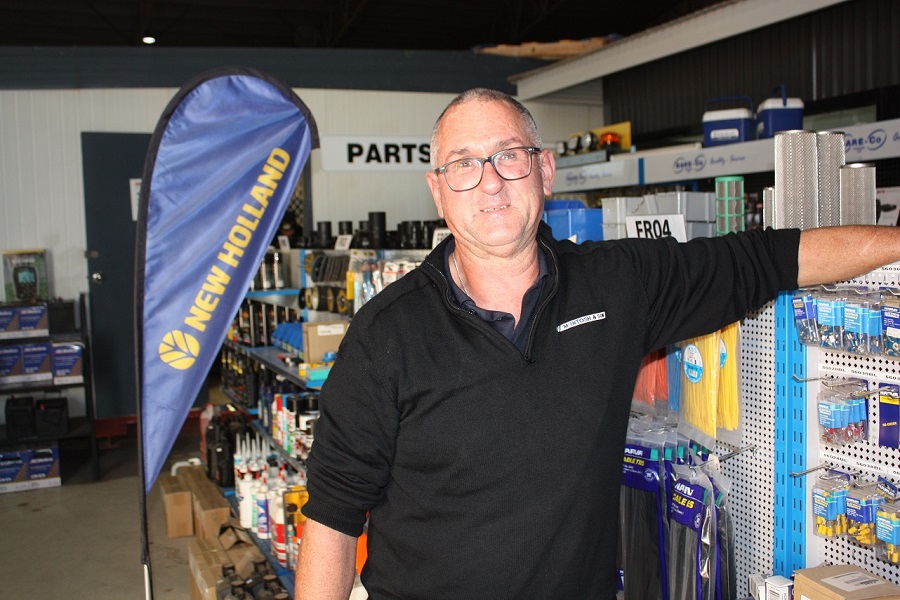 It is generally agreed that anything is only as good as the sum of its parts. Parts is the name of the game for a machinery dealership. Just ask McIntosh & Son parts interpreter Phil Kleeman who has been on the job for 39 years, 17 of them with McIntosh & Son.

A local farmer gave Torque the heads up about Phil, saying he was not only a font of knowledge for identifying machinery parts but also a “great guy and he deserves a story”.

Torque is always at the command of Torque readers which is why Phil received a surprised visit last week as he was winding down from seeding, while gearing up for harvest.

“We don’t stop,” he said. “The way farming has gone, parts has become a year-round business and we’re generally rostered on-call to facilitate customer requirements.

“It’s not uncommon for us to open the shop out of hours during hectic periods of the season so we can keep our customers going.

Phil started his parts career with New Holland dealership P L Bolto and served behind the counter there for 22 years before transferring to McIntosh & Son with the New Holland franchise, as “Bolto’s” focused on real estate.

That makes it 17 years with McIntosh & Son and Phil has built up an enviable reputation as one of WA’s most experienced parts interpreters.

“It’s a hard job and it has become more complicated by the technological advances that have occurred, especially over the past 15 years or so,” he said.

“I didn’t get any formal training but I was always around cars and later became involved with Massey Ferguson and New Holland products at Bolto’s.

“In those days we received training from AMCAP and then New Holland and now we regularly have in-house training with product updates and communicating with our service technicians.

“Because we’re a multi-franchise dealership, there’s a lot to learn about parts and you generally learn as you go.”

The other aspect of why a parts interpreter is so important to a dealership concerns demeanour.

A parts interpreter is generally seen as the “face” of the business and a good one will handle emotional issues with the focus on customer satisfaction.

“I learnt pretty early on to take a lot of stuff on the chin,” Phil said. “I remember being a week into the job and copping a blast from a farmer that affected me so much I nearly quit.”

Happily, these days, such incidents are a rarity and Phil has developed solid relationships with customers, who seek him out when they visit the dealership.

“There are a lot of expectations from customers and you’ve just got to be aware it can be very high pressure in an industry where time is literally money,” he said. “But the flip side is the gratitude of customers when you help them out and that’s a good feeling.”

Phil is keen to promote the ag industry, especially for the younger set looking for a career.

And a parts interpreter is one of many career pathways in machinery dealerships.