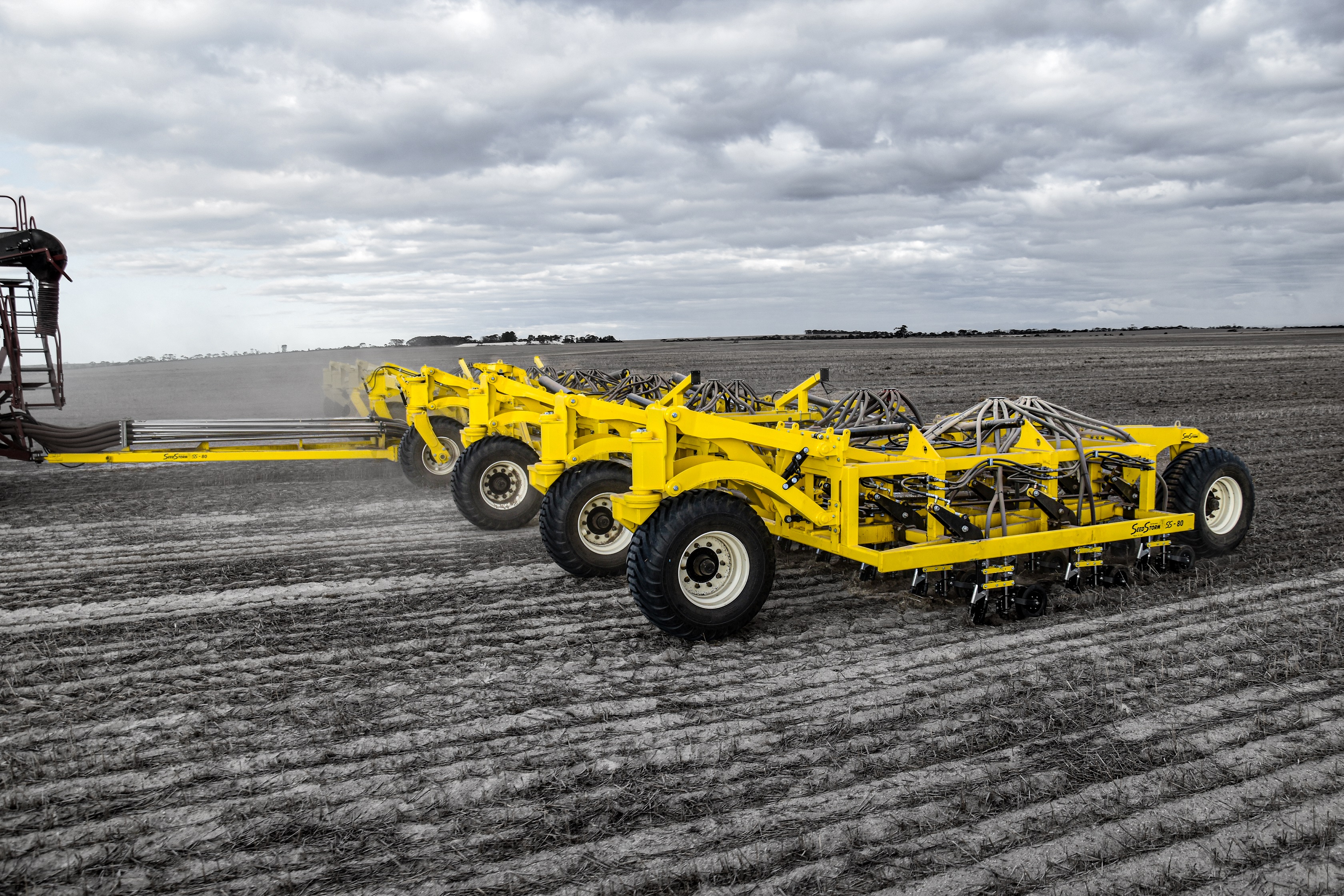 The three row bar is available in working widths from 35ft to 80ft with three, five and seven section configurations. Tine row spacings are 10 inch (254mm) or 12 inch (305mm).

According to Duraquip director Garry Richardson, the Seed Storm is a result of a judgement by the company there was an opening the market for such a bar.

“It was the same reason why we started making the Tornado (seed and fertiliser bin) because there was nothing like it in the market,” he said.

“The design parameters tick the boxes for trash flow, floatation and ground-following, floating hitch and a single frame lift.

“Not many bars have all of these features and we’ve added extras like solid hydraulic lines across the bar to minimise the hosing to each Groundhog tine assembly and seeding module.

According to Mr Richardson, a significant amount of FEA stress analysis testing was done to ensure optimum frame strength while the bar was been designed for low maintenance.

“For example, we only use Gar-Max bushes for all linkage components so greasing is kept to a minimum,” Mr Richardson said.

“They are self-lubricating bushes and designed for high-load capacity and shock resistance and they’re long-wearing.”

All models can fold to 7.5m to meet transport requirements.

Mr Richardson said he had been “blown away” by the initial response to the company’s move. “The news didn’t take long to hit social media and the reaction just confirms our opinion there is a need for such a bar,” he said. “Many of our existing customers have told us they are keen to have a look at it based on their experience with our quality-built Tornados,” Mr Richardson said.

Duraquip plans a limited production run for 2021 before full production the following year. “The timing of our initial R & D program has coincided with the COVID-19 pandemic which has disrupted supply chains throughout the world,” he said. “So we’ll have to wait a year before fully gearing up.”

According to McIntosh & Son Southern Dealer Principal Devon Gilmour, the Seed Storm would give the company two seeding bars to “meet the needs of the market”.

“We’ve been in tillage for a long time and it’s part of our DNA,” he said. “Tillage isn’t a one size fits all solution and different bars and different ground engaging solutions meet different requirements in the market. This was a driver in taking on the Ground Hog franchise five or six years ago and the Seed Storm brings that package together.”

Mr Richardson also lauded McIntosh & Son as a progressive dealership that had a strong dealer network with a commitment to country towns.

“You only have to look at what they’ve achieved in bringing more professionalism into the business along with a strong sales team, excellent service back-up and huge parts support.

“And the fact they already were selling Groundhog tine assemblies and seeding modules made it pretty easy for us to want to partner with them.”

“We have received positive feedback from our Morris Quantum bar owners this season and we already have stock of bars and air carts available for 2021,” he said.