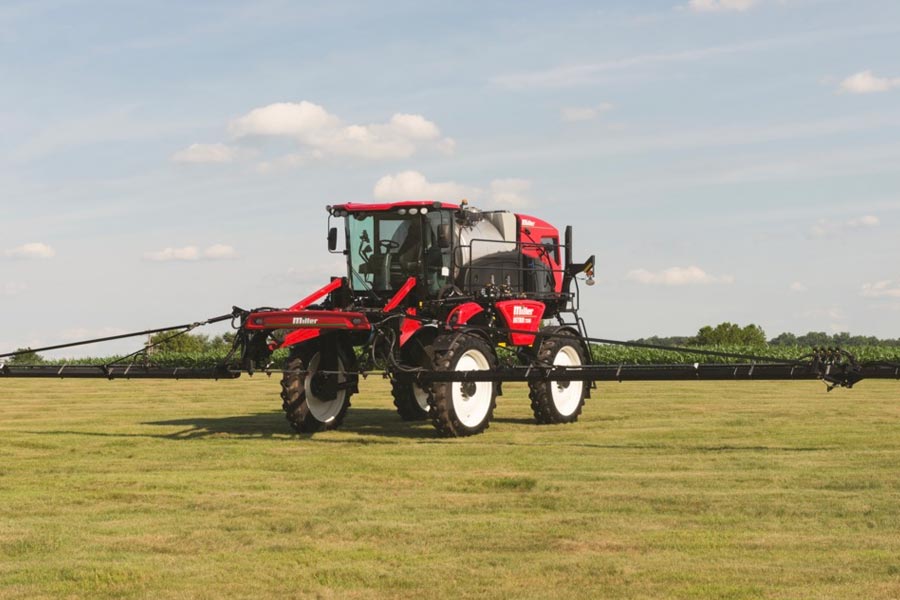 A new, adjustable chassis design on the new Miller Nitro 7310 sprayer has resulted in a 5 per cent lighter machine compared with the Nitro 5240, allowing improved flotation and less compaction. It has also produced an industry high, 2-metre ground clearance, which will better allow late season spray applications.LATEST Miller spraying technologies producing impressive efficiencies and better results for growers across the country are now available with a lighter footprint to suit row crop and medium size farming operations.

Even weight distribution provides balance, with near equal load on each tyre to maximise power to the ground while minimising compaction.

Jon said this would be particularly beneficial for cotton, corn, sorghum and sugar cane growers, as well as irrigated cropping paddocks, where multiple spraying applications can cause compaction concerns.

The new chassis has also produced an industry high, 2-metre ground clearance, which will better allow late season applications in these crops, as well as winter crops like canola.

Importantly, the Nitro 7310 uses the innovative drive train system that has been one of the key attractions of the popular new Miller 6000 series sprayers, providing maximum power and up to 30 per cent fuel savings compared with equivalent-sized machines.

The drive train was redesigned with a variable displacement hydrostatic drive system and planetary torque hubs, providing faster responses to speed changes through more efficient transfer of power to the ground, even at lower engine RPM.

The Miller Nitro 7310 is powered by a 6.7L, 310-horsepower Tier 2 engine and offers a 56 kilometre per hour road speed with four-wheel dynamic braking.

A variable speed, hydraulic-driven cooling fan runs only as fast as it needs to, saving horsepower and fuel while reducing noise.

Jon said another major benefit with the latest model in Miller’s popular, front-mounted sprayer range was the availability of a full range of boom options, including a 48.5-metre Pommier RA Falcon boom and Miller’s unique Spray-Air boom.

The Spray-Air booms have been used for a range of applications in a wide variety of crops, including cereals, canola, pulses, corn, cotton and sorghum.

The Spray-Air system allows for more targeted chemical applications through air-assist and air-atomisation technology, forming one powerful spray nozzle system. Growers have fingertip control of the droplet size and speed of the air delivery for any spraying application. They can consistently atomise spray droplets in a range from 200-500 millimetres per minute per nozzle – spaced 25 centimetres apart.

Jon said the ability to reduce water rates considerably with Spray-Air, which had also provided the best spraying results, could effectively double the size of the 4500L tank on the Nitro 7310, allowing growers to spend more time spraying and less time filling.

Redesigned lift arms, the removal of some componentry and large wrap-around windows provide better visibility and monitoring systems have been improved. Operating functions including speed, RPM, pressures, temperatures and fuel level, as well as a spray info bar with light-up section display, showing which boom sections are operating, are mounted on the ceiling so not to disrupt operators’ line of sight.

A right hand console chassis monitor, mounted on an adjustable swing arm, allows operators to easily program and control multiple sprayer functions, which are instantly displayed on the monitoring screen.

“With the significant chassis changes and new features through to small alterations right across the machine, it all adds up to a brand new Miller sprayer,’’ Jon said.

For further information on the new Miller Nitro 7310, growers and contractors can contact their local McIntosh & Son branch