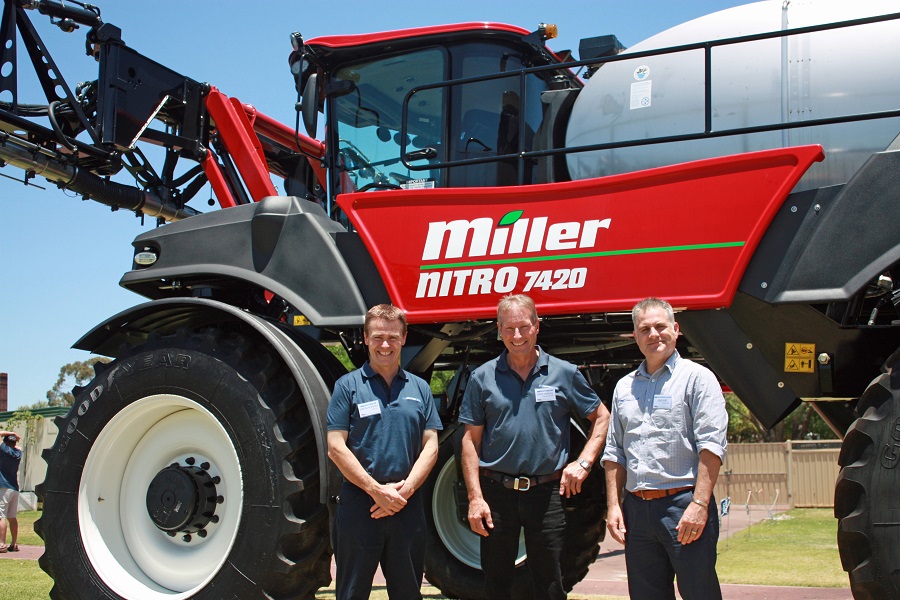 Duncan Murdoch and David Trindall (McIntosh & Son) with Jon Bent (Miller/McIntosh Distribution) at the launch of the all new Miller Nitro 7420.

THE latest addition to the popular Miller sprayer family was officially launched this week, with features including a more powerful, fuel-efficient engine and a new cabin.

The new Miller Nitro 7000 Series of front-mounted, self-propelled sprayers was unveiled by national distributor, McIntosh Distribution, at a recent dealer event in Perth.

Building on the success of the popular Nitro 6000 Series, two new Nitro 7000 Series models will be introduced to the Australian market in 2019, advancing on the 6333 and 6365 models.

According to Jonathan Bent from McIntosh Distribution, the Nitro 7000 Series offers significant increases in both horsepower and torque via its IVECO power plant, along with the benefit of better fuel efficiency.

“We are very excited about the release of the 7000 Series and we think growers will appreciate the range of features available on these models,” Jonathan said.

“We’re building on the feature set that we had with the 6000 Series, which gave us performance and reliability, better fuel economy and a focus on the operator environment, as well as functionality.

With a large tank size of 6100 litres, the new Series comes with a wide range of boom options, including the powerful Miller Spray-Air system, which is available on booms up to 36 metres.

The drive motors supply greater torque at all speeds, while the weight distribution has been carefully designed to ensure it remains within 4 per cent of 50:50 balance during spraying.

The cabin, designed for enhanced panoramic visibility with increased appointment and monitoring features, takes comfort to a whole new level. This includes two chassis and spraying monitoring screens, carefully placed within the cab to maximise ease of use without obstructing visibility.

“The auto rinse and fill function is the perfect example of how the 7000 Series has been designed to maximise productivity for the operator,” Jonathan said.

“We have a very good product in the 6000 Series and we are proud to have the opportunity to present an even stronger product to the Australian market with these new models.”

There is currently a stock run-out on the Miller 6000 Series at very competitive prices, but with limited stock available nationally.

Delayed payment terms are also available on the 6000 and 7000 Series. Growers can contact their local McIntosh & Son dealer for more information.