A close up of the Integrated Harrington Seed Destructor (iHSD) showing 'talcum powder' residue from the iHSD crowded out under the material from the chopper on top. This ensures dust is kept away from the engine bay. 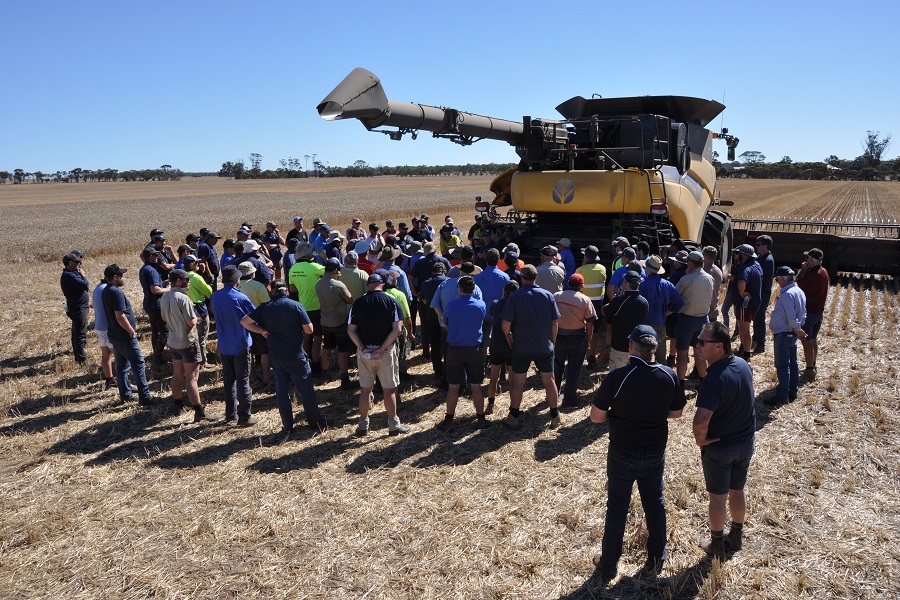 A New Holland 9.90 header in action at Broomehill demonstrating the new mechanical -drive Integrated Harrington Seed Destructor, watched by a crowd of about 120 farmers.

It is not often the words ‘game-changer’ are used in agriculture.

But those are the words that come to mind describing the new mechanical-driven Integrated Harrington Seed Destructor (iHSD), which has continued to record up to 99 per cent kill rates of targeted weed seeds.

And the reason why it will be a game-changer is because the price of $85,000+GST, will make it a “must-have” as an integrated unit on a header.

It will be hard for all combine harvester manufacturers to ignore this technology which already is raising interest in North America and Europe.

The new model is the same build as the hydraulically-driven version, with the addition of heavy duty belts to drive the upgraded robust cage mills.

Each mill contains a rota mill and a stator mill which counter-rotate at 3000rpm, which sees weed seeds virtually obliterated as they move through vertical vanes.

The mills only collect the chaff containing the weed seeds off the sieves with straw conventionally fed to choppers or out the back.

The new unit was demonstrated last Friday fitted to a New Holland 9.90 header, on a strip of crop left by the Bignell family at Broomehill for the demonstration.

According to McIntosh & Son southern branch manager Devon Gilmour, the Bignells played a major role in the development of the new model, including refining the new vertical system which replaces the horizontal mills.

“This is an evolution of a system which first appeared as a tow-behind unit, associated with inventor (Darkan farmer) Ray Harrington,” he said. “It has gradually evolved into an integrated unit able to be fitted to most popular brands of headers. (CLAAS header owners will have access to the hydraulic version).

“We tested eight mechanical-drive units in 2018 in all crop conditions and they performed to our expectations.

“The mechanical drive achieved the 3000rpm needed for the mills to perform at their optimum operating to crop capacity not header capacity.

“But by the end of 2017, it was clear we needed a more robust and simpler unit for handling big crops and big headers.

“It’s important to understand that we have designed this unit for the crops and not for the headers.”

Mr Gilmour said South Australian manufacturer DeBruin Engineering, had been involved in continuing research and development of the IHSD but had stuck with horizontal mills.

“Our impetus was to evolve the IHSD with our customers and the Bignells, particularly, helped with refining a vertical mill system, which also is a lot simpler than the horizontal models and easier to fix and maintain,” he said.

“We also had 18 big changes to the new unit which is retro-fittable to hydraulic versions.”

Design changes include a stone trap; an ability to calibrate a grain loss monitor; more positive material feed into the mills; double flighting on the auger to maintain balance as it wears; heavier duty bearings (rated at 4000rpm); elimination of electrics (except sensor and camera); upgraded pulleys; easier dismantling of the unit and no modifications to the header.

In one trial, wet straw was fed through the header, via a pick-up front, to find out what would break.

The only change was to “beef” up a bracket that cracked.

Retired farmer and McIntosh & Son product performance manager Craig Dennis, who oversaw testing of the new unit, said the wet straw blocked the mills “a few times” and he had thought emitting smoke was the result of a “smoked belt”.

“It turned out the hot mills were boiling the chaff,” he said. “We had about a fifty-fifty split with material going through the mills and the chopper.”

One of the first questions asked by the group of about 80 farmers who attended the demonstration related to dust.

“The residue coming out of the mills is like talcum powder so you can’t spread it,” Mr Dennis said. “Our challenge was to keep it away from the engine bay and the air cleaner and we have done that by putting the material under the air blast from the chopper.”

Trials suggest wear of the mills is between 300 and 600 hours with a full set (left and right sides) costing less than $9000 to replace.

“The big thing about wear is that it mainly is dependent on how much grain in going through the mills, which causes the wear,” Mr Dennis said.

There are only 100 units allocated Australia-Wide for 2019.

The IHSD was developed by UniSA with funding and support from GRDC.

For further information on the new vertical, mechanical iHSD and its role in reducing herbicide resistance and improving returns from cropping investment, growers can contact their local McIntosh & Son dealer.