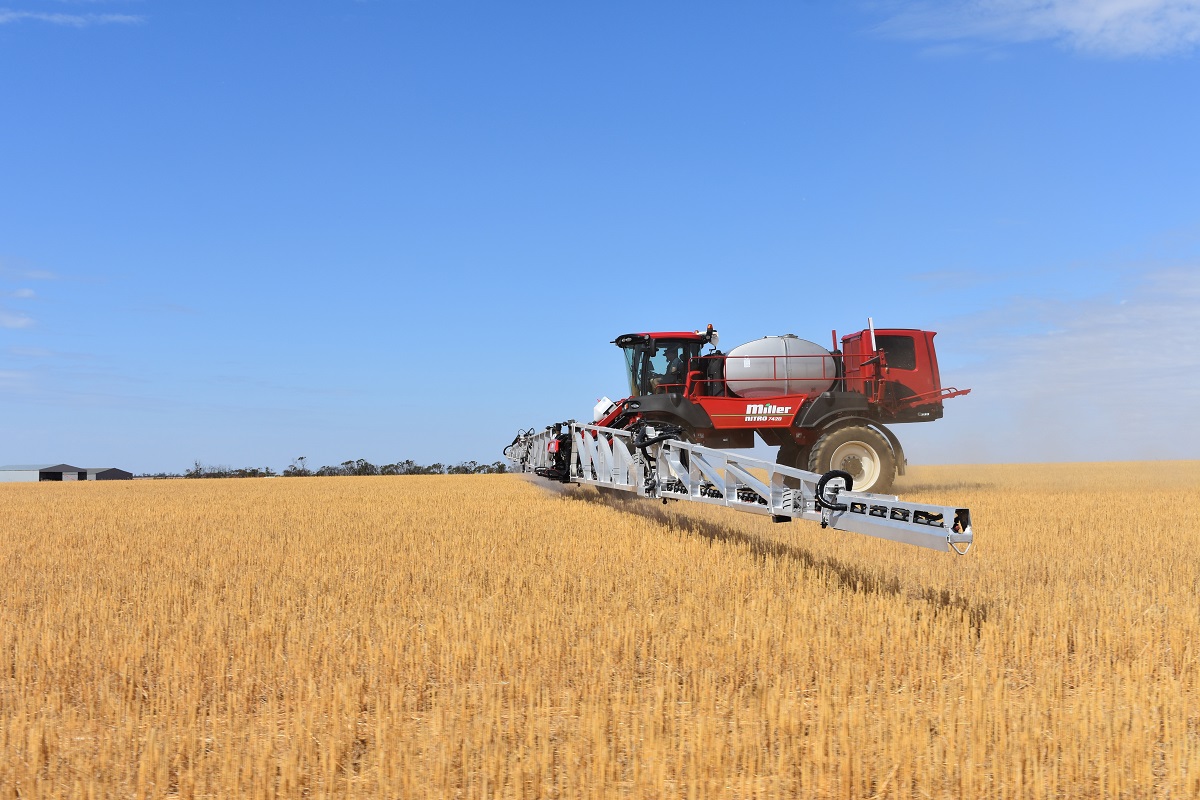 The Pommier 48-metre aluminium boom is becoming a popular choice for growers with sales of Miller sprayers. Mingenew grower Sam Ward says it is all about minimising depreciation.

The Ward family near Mingenew have been long time users of Miller sprayers, turning them over after around 1700 hours. Comfort and durability have been the big attractions and by opting for a 48-metre Pommier boom with their latest Nitro 7420 sprayer, they are going to enjoy the comfort for a lot longer…and save a lot of fuel doing it.

LARGER spray booms are becoming popular with many growers not only for the additional speed and efficiency of completing spraying programs, but also for the longevity of machines.

The Pommier 48-metre aluminium boom is one attracting increasing demand with sales of Miller self-propelled sprayers.

Already well proven in field performance and reliability, the Pommier boom is used with a specific Miller centre frame and comes with standard hydraulic anti-yaw.

Mingenew grower Sam Ward, who is part of a long family history using Miller sprayers, took the Pommier boom option with his latest Miller Nitro 7420 sprayer, a big jump from using a 36m boom on a Nitro 5365 machine previously.

“It’s very efficient and the great thing about the Pommier on the Miller is it’s single fold,’’ Sam said.

The family has traditionally traded-up their Miller rigs after a few years at around 1700 hours, but Sam is hoping his latest Nitro 7420 model will be put to work for four to five years and is confident it will surpass 1700 hours.

“The wide boom is all about minimising depreciation. It’s doing more hectares per hour and so that’s less engine time.’’

As another bonus, he said there was also less wheel markings in paddocks, helping to prevent compaction.

Sam and his wife, Chloe, together with their young daughters, Ada (2) and Wren (4 months), have been farming a 9000ha property near Mingenew since 2015 after being involved in a family farming operation in the area.

Sam said they employed as many options as possible in the weed management strategy.

Mouldboard ploughing has helped to bury a lot of weeds, while an integrated Harrington Seed Destructor (iHSD) has been installed on both of their CLAAS LEXION headers to help improve harvest weed seed control.

The Ward’s sprayers have always had a busy schedule, with around four passes for the cropping program, also to apply liquid nitrogen fertiliser, plus any summer spraying.

Sam said the family had used several Miller Nitro 4000 Series machines and had the 5365 prior to skipping the manufacturer’s 6000 Series and jumping straight into a 7420.

Comfort and durability have always been the most appreciated features of the Miller sprayers for the Wards and Sam said each generation had got “better and better’’.

“It’s spacious in the cab and has great visibility.

“All our Miller sprayers have never missed a beat. We haven’t had any mechanical issues that have stopped us. The mono booms are good, they fold quick and they are low maintenance.’’

A hydrostatic Danfoss pump system features electronically-controlled variable displacement piston drive motors and integrated Fairfield Torque-Hub planetary final drives. The drive motors supply greater torque at all speeds, while the weight distribution has been carefully designed to ensure it remains within 4 per cent of 50:50 balance during spraying.

“Going over deep-ripped land with our 5000 Series sprayer also used to be a task for it, but this latest machine just charges along,’’ Sam said.

“We are getting an extra 400ha out of a tank of fuel, so a total of 900ha, travelling at spraying speeds of 22-32 kilometres per hour depending on the conditions.’’

The Wards operate a twin tiered spray line system on the Pommier boom and can have up to three tiers.

“We have a 250-millimetre spacing between the nozzles and at a slower speed, one every second nozzle operates. At the next speed level, a slightly different size nozzle can kick-in. You can have a smaller nozzle in between the 250mm-spaced nozzles. It helps to optimise your pressures as you increase your speeds,’’ Sam said.

“Rather than running electric cables, we just have air lines and the air supply activates the nozzles on and off.’’

The front-mounted Miller sprayers also are an advantage for spraying in dusty conditions during summer and Sam said they were able to tailor nozzles in front of the wheels and use two nozzles near the rear wheels to minimise dust effects.

Miller sprayers are distributed nationally by McIntosh Distribution and the Wards secured their latest machine through local dealer, McIntosh & Son at Geraldton.

Sam said customer service from Craig Ajduk and the team was elite and service technician Steve Rowland was excellent “on the tools’’.

For further information on the Miller sprayer line-up, growers can contact their local McIntosh & Son Dealership.. They can also now take advantage of the Federal Government’s 100% upfront tax deduction on machinery purchases.