Increasing the Efficiency with New Bar 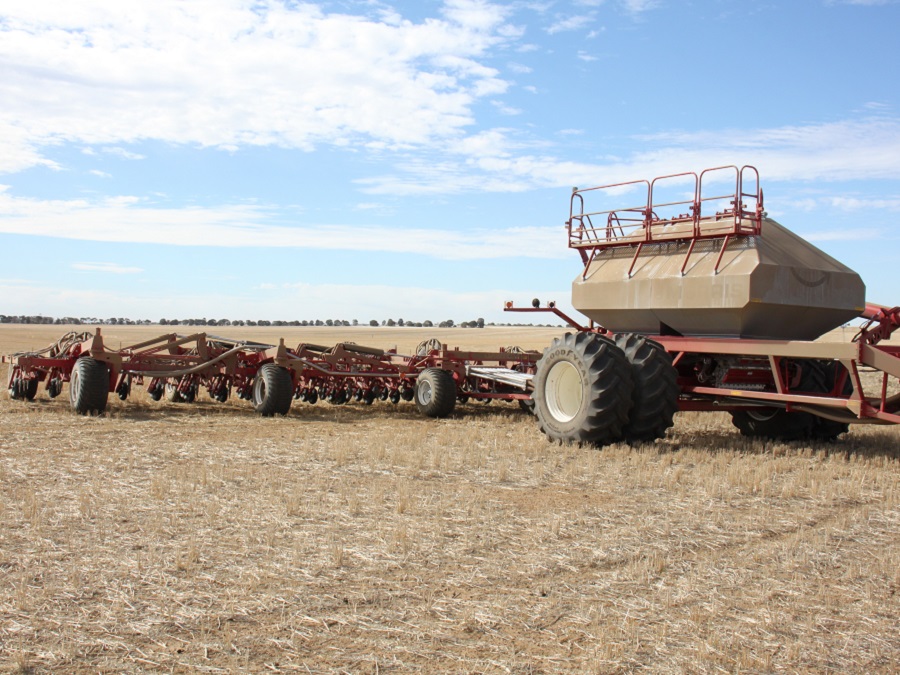 Murray Leach, Corrigin, with his 600hp Challenger tractor and his Morris Quantum bar and air cart, bought this year.

Mr Leach said it was time for a new bar and upgrading to the new Morris Quantum 21.3 metre (70 foot) bar was a step closer for him to get precision placement.

“My son Peter and I are trying to get better seed placement and more efficiency with our gear,” Mr Leach said.

Mr Leach, who originated from Tambellup, said they never had technology like the bar when he started farming and it had been a learning curve.

“When we came here we had one of the first GPS systems and now we are using section control on our air seeder,” he said.

“Trying to wrap your brain around how it all works, especially for me, it has been a big step.

The new air cart can seed 105 hectares of barley per box full, which has significantly decreased the amount of times the tractor stops to fill up.

Mr Leach has focused more on efficiency and this year is hosting a Corrigin Farm Improvement Group (CFIG) trial.

He will host the trial, optimising plant establishment, density and spacings to maximise crop yield and profit in the southern and western regions.

The trial, which was invested in by Grains Research and Development Corporation, will compare canola establishment, vigour, yield and grain quality across a combination of two seed depths and three sowing speeds.

CFIG executive officer Veronika Crouch said the season may prove difficult to achieve even canola establishment, however it should provide some clear differences between the trial treatments.

“Rapid and even crop establishment is a foundation of vigorous and high yielding crops that are competitive against weeds,” Ms Crouch said.

“In recent years there has been growing interest in Australia and overseas in adapting precision seeding technology that is widely used in summer crop production, to winter crops.

“Particular interest has been shown in the potential of precision planting and singulation to reduce seeding rates and seed costs in crops, such as hybrid canola where seed costs are high.”

However, Ms Crouch said there was little information on the current levels of crop establishment and stand uniformity in the major winter crops.

“While precision seeding may be seen as a gold standard in improving stand uniformity, there may also be significant gains to be achieved by improving the operation of conventional seeders,” she said.

Mr Leach said the trial would allow him to analyse his seeding depths and seeding speeds to try and get the ultimate placement of canola.

“I want to see if speeds change the placement of seed and the efficiency of its growth,” he said.

“I really like trials, mainly because you can go to anybody else’s trial but it’s just not the same as your own place.

“You want to see what works on your farm and you always learn something from your trials, sometimes what not to do.”

Mr Leach did comment that trials can be “fiddly” and a real pain when trying to seed everything exactly in trial plots but he said the information is worth it in the end.

Although he hoped the trials will eventually be seeded as he had already dropped 60-70% of his own canola program due to the dry start.

Those hectares will be replaced with barley.

“I just wish it would rain like everybody else,” he said.

“We are only just cruising along at the moment and we haven’t gotten serious because of the dry.”

Already Mr Leach is about halfway through the 3200ha program, only seeding barley so far.

“Barley is our main crop,” he said.

“Over 50% of our program goes to barley on a usual year but this year we will plant 70% barley“. Wheat will take up about 20% while canola fills the other 10% this year.”

Mr Leach said he was happy to remove canola from the program because most of the paddocks were clean enough to get away with it this year.

Since starting seeding at the end of April, barley has started to show up in patches due to isolated storms in March and April.