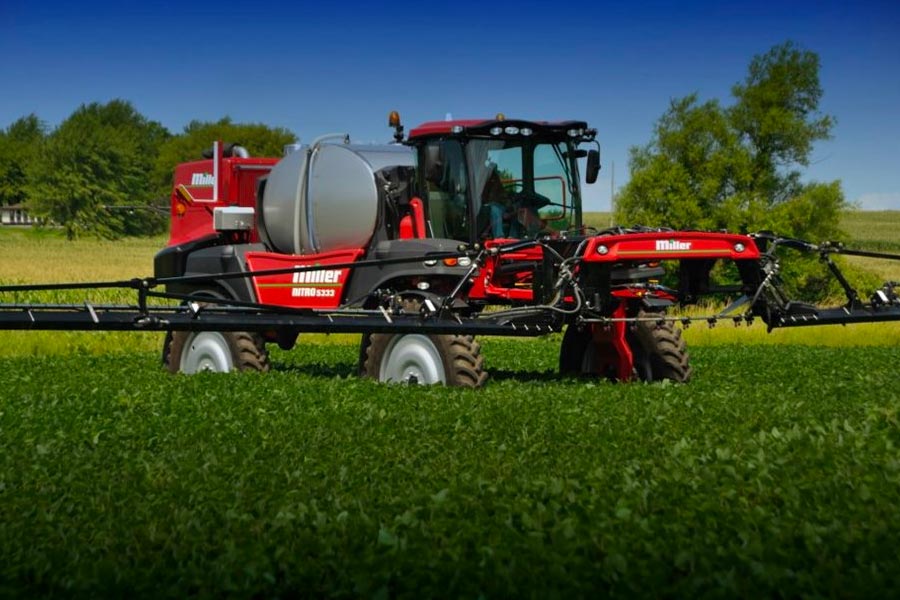 ACHIEVING fuel savings of up to 50 per cent, it’s fair to say that Western Australian farmer Grant Collins is pretty happy with the performance of his new sprayer.Grant, his wife Tracey and their three children farm at ‘Mileura’, near Nyabing, with the property spanning 8000 hectares.

They run 750 Chargrey breeders and crop 6000ha to wheat, barley, canola and lupins.The Collins took delivery of a new Miller Nitro 6333 back in April from their local dealer, Steve Morro at McIntosh & Son Katanning.

They upgraded from a Miller Nitro 5275 with a 36-metre (130-foot) boom, which Grant said had served them well for three seasons.“Prior to that we had tug-a-long sprayers, but since going to the front-mounted booms on the Nitro, we couldn’t go back,” Grant said.

“We liked the 5275, which is why we’ve gone for another Nitro, but the excellent service and support we get from our local McIntosh & Son is also a huge factor as to why we upgraded.”

This season is looking promising for the Collins, although the spraying program has been considerable. The new Nitro has clocked up 600 hours already, and that doesn’t even account for the extensive summer spraying done prior to its arrival on-farm.

The majority of spraying done at ‘Mileura’ is undertaken by the Collins’ farmhand, Laurie Steer, who has had plenty of time to appreciate the comfortable, quiet cab and all-wheel suspension system on the Nitro.

Grant said their Nitro 6333 had a 41m (135ft) boom, with the increase in boom size having notably increased their efficiency, allowing them to cover more ground.

He said they had also opted for their 6333 to be fitted with Miller’s Hawkeye Nozzle Control System.

Hawkeye is a pulse width nozzle system that allows for precise sprayer application, maintaining droplet size regardless of speed.

It utilises 36 virtual nozzle groups, maximising use from every nozzle using an individual pulsing valve that provides a consistent spray pattern regardless of conditions and/or speed.

“Now we’ve got our minds around nozzle selection, it’s a lot more effective.“You can change your ground speed without any impact on the application and it generally gives you more flexibility with a standard-type nozzle at different rates.”

For Grant, the comparative fuel use between their previous 5275 model and the 6333 has been vast.

“The biggest thing for us since the upgrade has been the remarkable fuel savings,” he said.

“We’re seeing an increase in efficiency and fuel savings up to 50 per cent compared to our 5275, which we used to follow around with the nurse truck and fuel tanker.“It’s the new planetary drive that makes the difference.

“It’s been that dramatic, that now when you’re on the sprayer you don’t even have to think about fuel.”