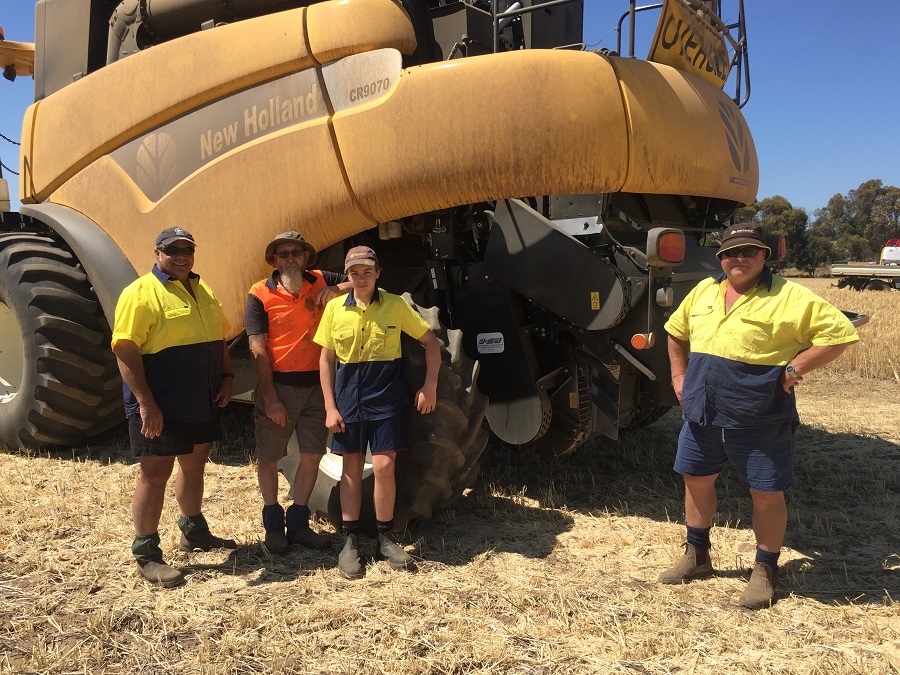 KATANNING cropping brothers Stephen and Richard Marshall were pleased to wrap-up the 2019 grain harvest last week with above average yields and it was a new addition to their harvesters that brought some of the greatest satisfaction.

The Marshalls had the latest version of the Harrington Seed Destructor installed on their two New Holland CR 90.70 headers by local dealer, McIntosh & Son, for this harvest and they completed the program without a hitch.

“I said to a neighbour it’s great that when we see weeds on the header now, we know we are pulverising them to dust right then and there. We are destroying them,’’ Stephen said.

“It’s a numbers game (with weeds) and we won’t get them all, but it’s the same with chemicals. We might be killing 98% through the Destructor, but we are not getting 98% in the paddock.’’

The Marshalls grow wheat, barley, canola and lupins on their two main ‘Clifton’ farms east of Katanning, as well as properties near Nyabing and Dumbleyung.

Stephen said they had carried out narrow windrow burning for years to help limit weed seeds before turning their attention to harvester-integrated weed seed control systems.

“We spent a lot of time and money windrow burning and the nutrients went up in smoke, whereas now we are spreading it across the paddock.’’

Like many growers, he said they had been monitoring harvester weed control systems over recent years before deciding to invest in the vertical Harrington Seed Destructor for their headers this season.

“We looked last year and the year before. We were keen, but we just wanted to wait another year,’’ Stephen said.

“We saw other mills and also the hydraulic-drive version and we thought it was great, but we knew there were a few issues and it was a large expense.

“Then when they came up with this latest system (of the Harrington Seed Destructor), it convinced us. It was very basic, more simplified and it cost a lot less.’’

He said Richard and a workman also attended a demonstration with the new vertical Seed Destructor earlier this year near Broomehill, where independent testing confirmed a weed seed kill rate of at least 98% at various harvester operating speeds, including 4, 6 and 8 kilometres per hour.

“It was good to see the independent testing showing that you can keep the kill percentage right up there at the different speeds.’’

Dr Mike Walsh, University of Sydney, said the testing confirmed the efficacy of the new vertical Seed Destructor on annual ryegrass seed was very high, ranging from an average 98.2% at a harvest speed of 4kph up to 99.5% at 6kph, equivalent to the levels of the earlier horizontal Seed Destructor.

Stephen said they ran the vertical, mechanical-drive system at 3000-3080 RPM with the New Holland headers, which also were fitted with Steinbauer power chips.

“We wanted to run at that full capacity,’’ he said.

“Our headers are a bit older. They worked hard, but they held where they needed to be. We had patches of large crops and it (the vertical Seed Destructor) handled it well.

“We were not super fast. We go low to the ground – coke can height and it can be an inch or two lower – so we went from about 7.5-10kph and averaged 8kph.

“We used it across everything and had a good run in the lupins. Another farmer with two (other mill brand) systems in two late model John Deere headers asked how we went with the lupins because they were getting blockages and it was dirtying up their belts. The Destructor worked well and our best lupin crop was a couple of tonnes (per hectare).’’

Stephen said the ability to easily check grain losses and empty a stone trap also were handy features with the latest system.

“We took the two covers off – the stone cover and the back cover – to do the grain loss checks. You can get a good indication with what’s on the ground. We had our settings pretty well right and it was good to confirm.’’

“We also had peg covers from the repeats elevators go through the system and fall into the stone trap.’’

Invented by WA grower Ray Harrington and developed by UniSA with investment from GRDC, the Integrated Harrington Seed Destructor has undergone continuing development in recent years by DeBruin Engineering, together with national distributor, McIntosh Distribution.

The new vertical, mechanical-drive system, which uses the same mill set as the hydraulic version, can be fitted to later model John Deere, Case IH and New Holland harvesters, with no permanent modifications required.

For the 2020 grain harvest, only 200 Integrated Harrington Seed Destructor units are expected to be available Australia-wide. Growers interested in further information about the latest system and early orders for next season can contact their local McIntosh & Son dealer.