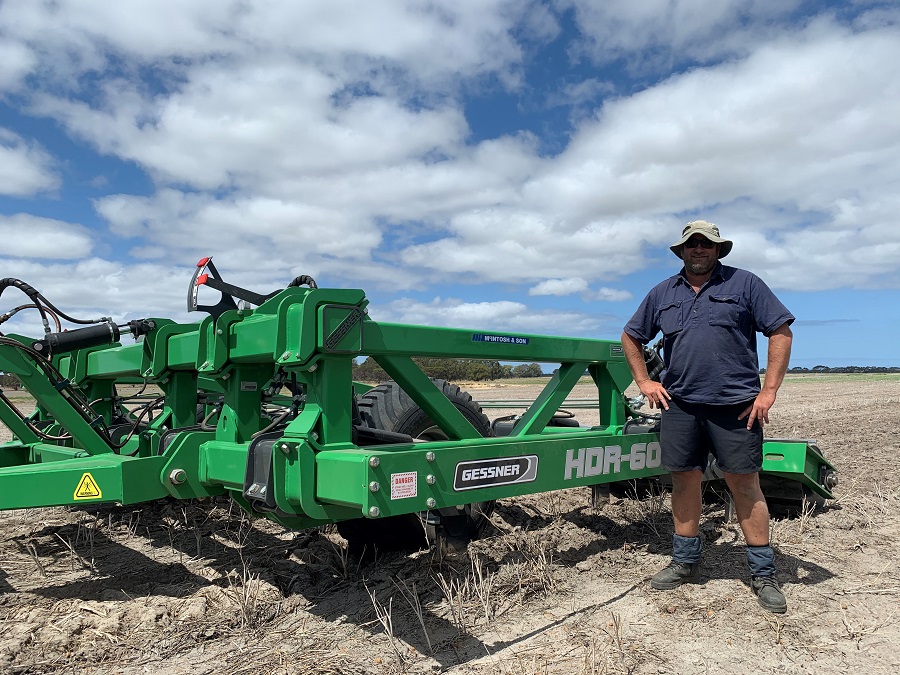 David Gray, who farms at Coomalbidgup, near Esperance, with his Gessner Industries Hydraulic Deep Ripper (HDR-6011).

THE benefits of deep ripping soils to help unlock crop yield potentials are increasingly being realised and again underpinned strong interest in recent demonstrations across the State of one of the latest machines used for the practice.

Jakke said while they were bringing clay to the surface in sandy areas closer to the coast to help improve soil structures, in northern areas the focus was on breaking hardpans in heavier soils.

McIntosh & Son has staged multiple demonstrations of the Gessner Industries Hydraulic Deep Ripper (HDR-6011) in recent weeks, and it is now headed into other southern areas, providing opportunity for more growers to inspect the machine.

Jakke said one of the major attributes with the Australian-made Gessner ripper was its ability to rip to a depth of 700 millimetres.

“Most machines can rip to a depth on the sandplain, but it becomes more difficult in heavier country,’’ he said.

“It’s the weight in the frame with the Gessner machine that allows it to deep rip to that depth in country where some other systems don’t stay in the ground.’’

As a result, it works hard and the McIntosh & Son team have been pulling it with a 460-kilowatt (620-horsepower) Versatile DeltaTrack.

Jakke said the shape of the tynes, in contrast to straighter tynes with most other machines, also resulted in greater lift and sideways shattering effect in soil profiles.

“It’s more of a ‘J’ shape and so it locks in the ground rather than riding out.’’

There are 11 tynes spaced at 545mm intervals across the machine, providing a true 6-metre wide ripping swath.

“It’s got a tolerance and if you are going from sandplain and hit some coffee rock, for example, it will have a spike in pressure and will keep that pressure on the roller.’’

The machine provides nearly 3000 kilograms (6500 pounds) of breakout force and the centre frame is manufactured with 16mm RHS steel.

Jakke said growers had been particularly impressed with the tradesmanship and complete build of the Gessner Industries Hydraulic Deep Ripper (HDR-6011), especially considering concerns around longevity with other systems.

They also were pleased with the local warranty, service and parts back-up for the machine through the McIntosh & Son branch network.

“We have been working closely with Gessner linked with grower feedback from the demonstrations and the response has been very quick, which is excellent,’’ Jakke said.

Growers who also have taken immediate advantage with a machine on their properties have been thrilled with its performance.

Southern growers who may be interested in a demonstration or further information on the Gessner Industries Hydraulic Deep Ripper (HDR-6011) can contact their local McIntosh & Son dealer.