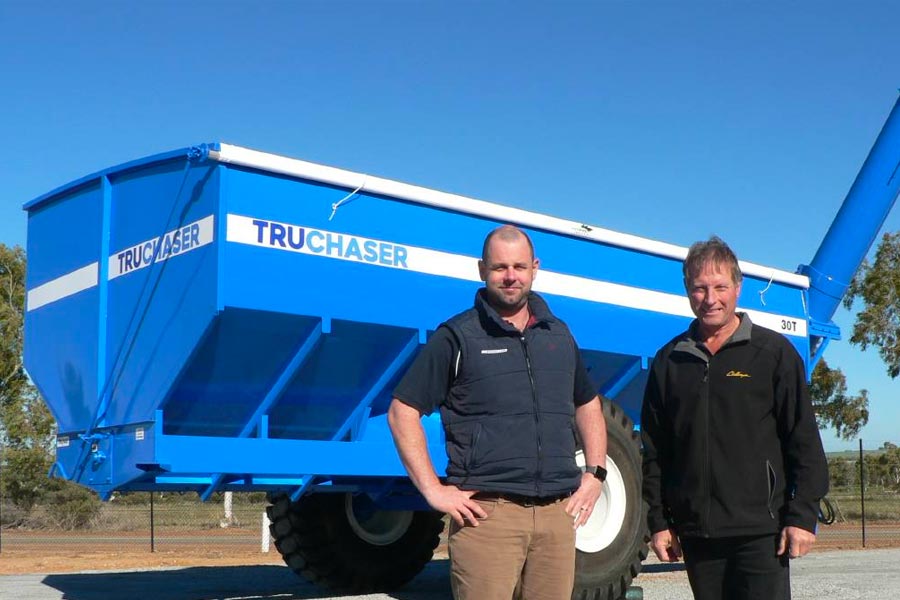 THE need for a quality, Australian-made chaser bin at a realistic price for producers has been the driver behind a partnership between WA-based agricultural machinery dealer, McIntosh & Son, and manufacturer, Trufab, that has delivered the new ‘TRUCHASER’ for the 2017 harvest.

Exclusive to McIntosh & Son, available through all of its branches and set to be distributed Australia-wide, the TRUCHASER provides a cost-effective solution for grain handling that is simple, easy to operate, efficient and builds on Trufab’s manufacturing reliability dating back to 1982.

Based on Trufab’s recent Grain King models, the TRUCHASER chaser bins are available in 18, 25 and 30-tonne options with either single axle or tandem steerable axles, the latter of which also feature leaf suspension.

The single axle units have a total width under 3.5 metres, preventing any requirement for road escorts, while the tandem axle units have 3m wheel centres, making them ideal for controlled traffic operations.

“That’s pretty good to have on tandem units. It’s a high-spec undercarriage for an affordable price,’’ Anthony said. Prices for the McIntosh & Son TRUCHASER chaser bins start at $63,800 (including GST). Anthony said the chaser bins had only just arrived at dealerships, but had already attracted some early interest.

They will also be on display at the upcoming Mingenew, Dowerin and Newdegate field days in WA.For further information on the McIntosh & Son TRUCHASER chaser bins, producers can contact their local dealership.