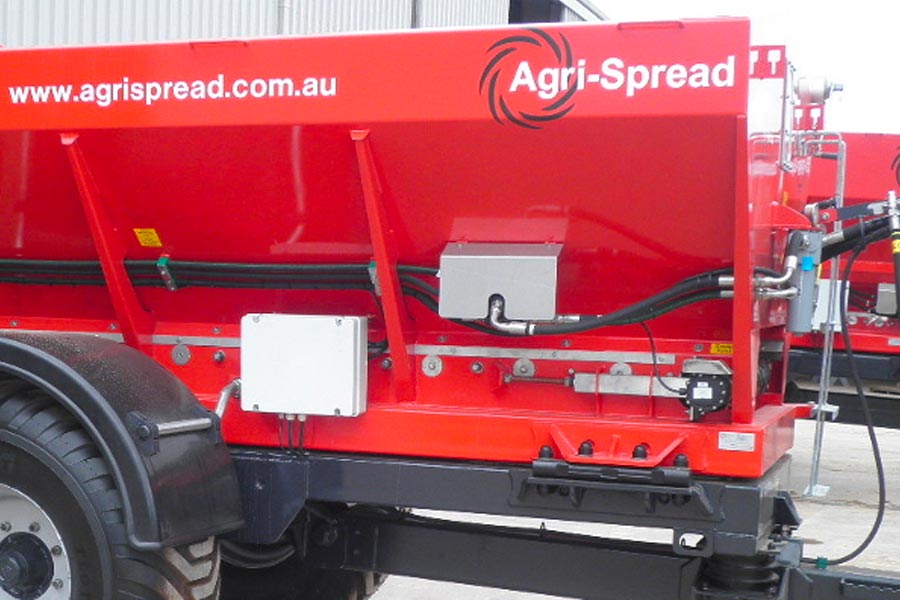 But you’re on the South Coast at Condingup so you’ve got to expect that.

To get the pre-sowing spreading done you figure in a 21 hour-a-day operation and hope you get a reasonable result.

For “Condy” operations manager Dafydd (it’s Welsh) ‘Daf’ Jones, hope was the operative word, using two spreaders on controlled traffic lines and struggling to get the required width and even spread – demonstrated by tray tests.

That all changed this year when Daf’s boss Andrew Fowler bought a AS150-T Agrispread from McIntosh & Son, Esperance, in February.

The Irish-built model, imported by Waringa Distribution, has quickly earned the thumbs-up from Daf, completing the preseeding program without a hitch.

“We’ve been going around the clock in all sorts of wind conditions and we’re very happy with the even spread across the widths,” Daf said.

The addition of hydraulically-operated curtains has meant an extension of the spray window.

“With the old models we used to run them at night when there was little or no wind,” Daf said.

“But with the curtains we can do a heap of work during the day and we activate the curtains once the wind gets up to about 20km/h,” Daf said.

“We have wind speeds up to 40km/h and with the curtains we get a very good even spread, even at 36m (Andrew opted for the 36m spinner kit).”

Daf is impressed with the load cells which he said were an important addition to the Agrispread.

“Weighing is spot on,” he said. “It means you’re always getting the rate you want.

“And we spread 8000 tonnes without a hectare more to spread, which makes the unit pretty accurate.

“The model is also variable rate-ready so that’s handy knowing we can do that in the future.”

Daf also is impressed with the service back-up.

“Agrispread’s customer support manager Sam Abbott and the McIntosh service team have been a big help for us in getting the most out of the machine and it makes a big difference having somebody with the machinery knowledge,” Daf said.

“Soon we’ll use the Agrispread to put out 12 tonnes of slug pellets at 24m (80ft) which is absolutely perfect for our controlled traffic,” Daf said.

“We usually do it with a spinner off the back of a ute, targeting patches.”