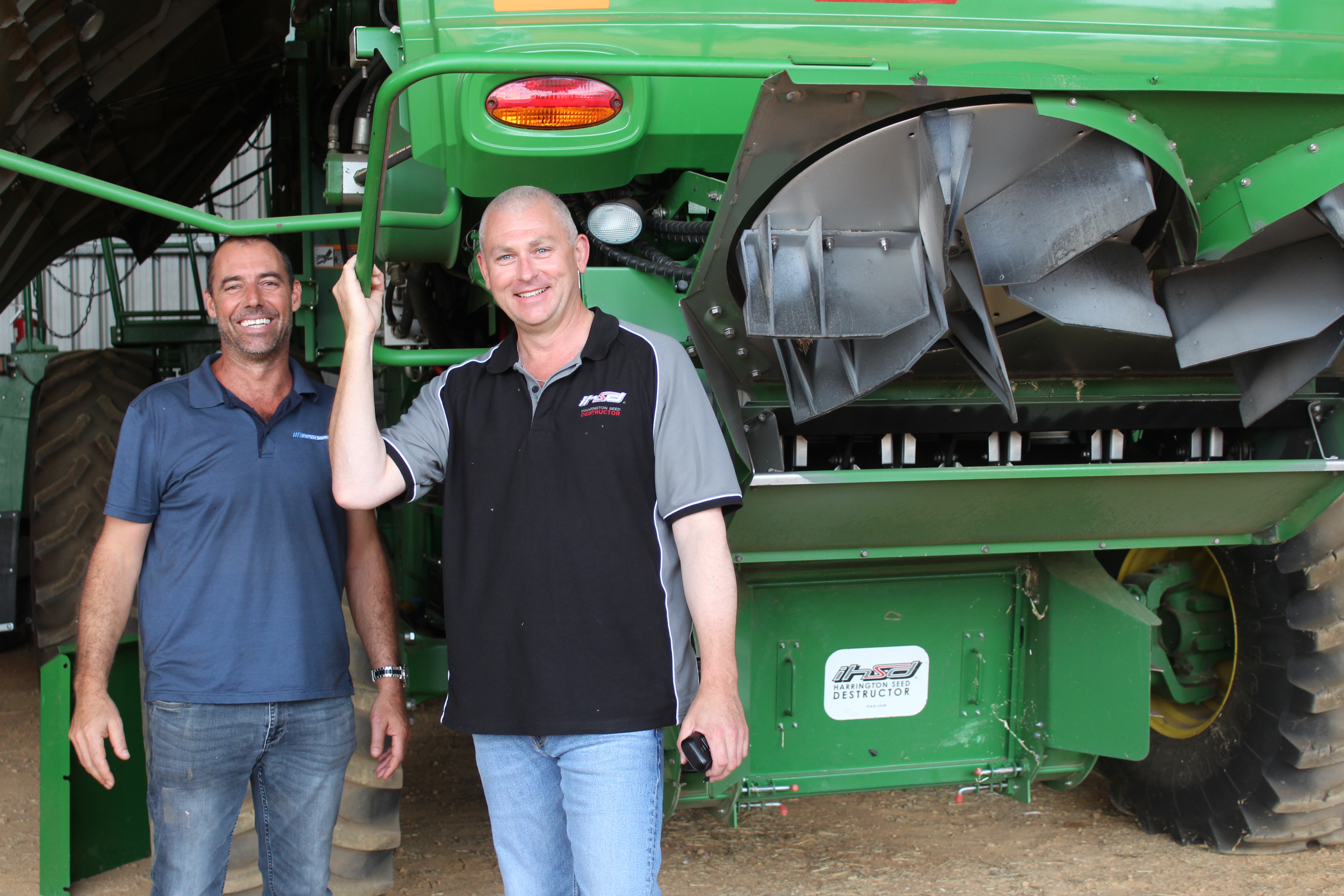 Since moving to a vertical, mechanical direct drive system, the integrated Harrington Seed Destructor (iHSD) has significantly increased its presence in the market.

Invented by WA grower Ray Harrington and independently shown to kill up to 99 per cent of weed seeds, the Seed Destructor is designed and manufactured by de Bruin Engineering and distributed nationally by McIntosh Distribution. The core mill technology was developed by UniSA with funding and support from GRDC.

de Bruin Engineering Product Support Manager Andrew Vearing said the Seed Destructor was the only vertical system available and this greatly reduced the bridging and blockage issues that could frequently occur with other systems.

“Bridging can be a problem in canola and other bulky crops, as well as when there is green material, and particularly in the higher rainfall regions,’’ said Andrew, a senior mechanic and grower who also previously operated his own harvest contracting business for 12 years.

“The type of combine used also can be a contributing factor, with some headers having the benefit of distinct separation of the straw and chaff.’’

iHSD dealers can fit the Seed Destructors to all major harvester brands including Case IH, John Deere, New Holland and Claas headers, with no permanent modifications required, and they have the specialist knowledge in providing ongoing backup and technical support for the systems to customers.

The vertical design, together with a stone trap at the bottom, also provides higher protection for the Seed Destructor mills when foreign materials enter harvesters.

“Retractable fingers, knife guards, some limestone or even fencing wire can still go through headers, but the vertical Seed Destructor handles it pretty well and most of the time they can be found in the stone trap.’’

He said the ability to remove the rear door to check grain losses or remove all doors to drop chaff in a row were some of the other benefits offered by the Seed Destructor.

Meanwhile, Andrew said it was critical for growers to “take time’’ in setting up their harvesters to suit their region, the environment, their particular crop types, and the condition of their crops.

“The target is to achieve maximum header capacity and throughput and to effectively handle your MOGs (matter other than grain).’’

“It is critical for growers to optimise their set-up, so they can achieve optimal capacity and productivity for their operation.

“Even different wheat varieties can be harder to thresh or separate and areas of frosted crop can have a big impact with grain loss variability and, in turn, mill wear. Light weight grains pass through and end up in the mill. Then being denser, it becomes like grit or sand going through the mill.’’

He said growers could minimise risks to optimum performance by working closely with their local, experienced technicians and by looking at fitting options for items such as beater plates, transport vane adjustments, concave modules, sieves and fan settings.

“Most iHSD dealers have a lot of experienced header ‘techs’ and they can do a lot of this work.’’

Andrew said grower feedback on the latest Seed Destructors had continued to be very positive and they were recognising the benefits as part their weed management strategy.

“Growers who have been running harvest weed seed control for a couple of years have sometimes said they will just use the Seed Destructor on their cereals, but by harvest time they say: ‘no, we will use it across everything because we can see the ryegrass’ and we know it is taking care of it as it passes through.’’

“Agronomists have also commented that growers using the systems are making headway with their weed issues,’’ he said.