Spray system specialist back in the flow with Miller 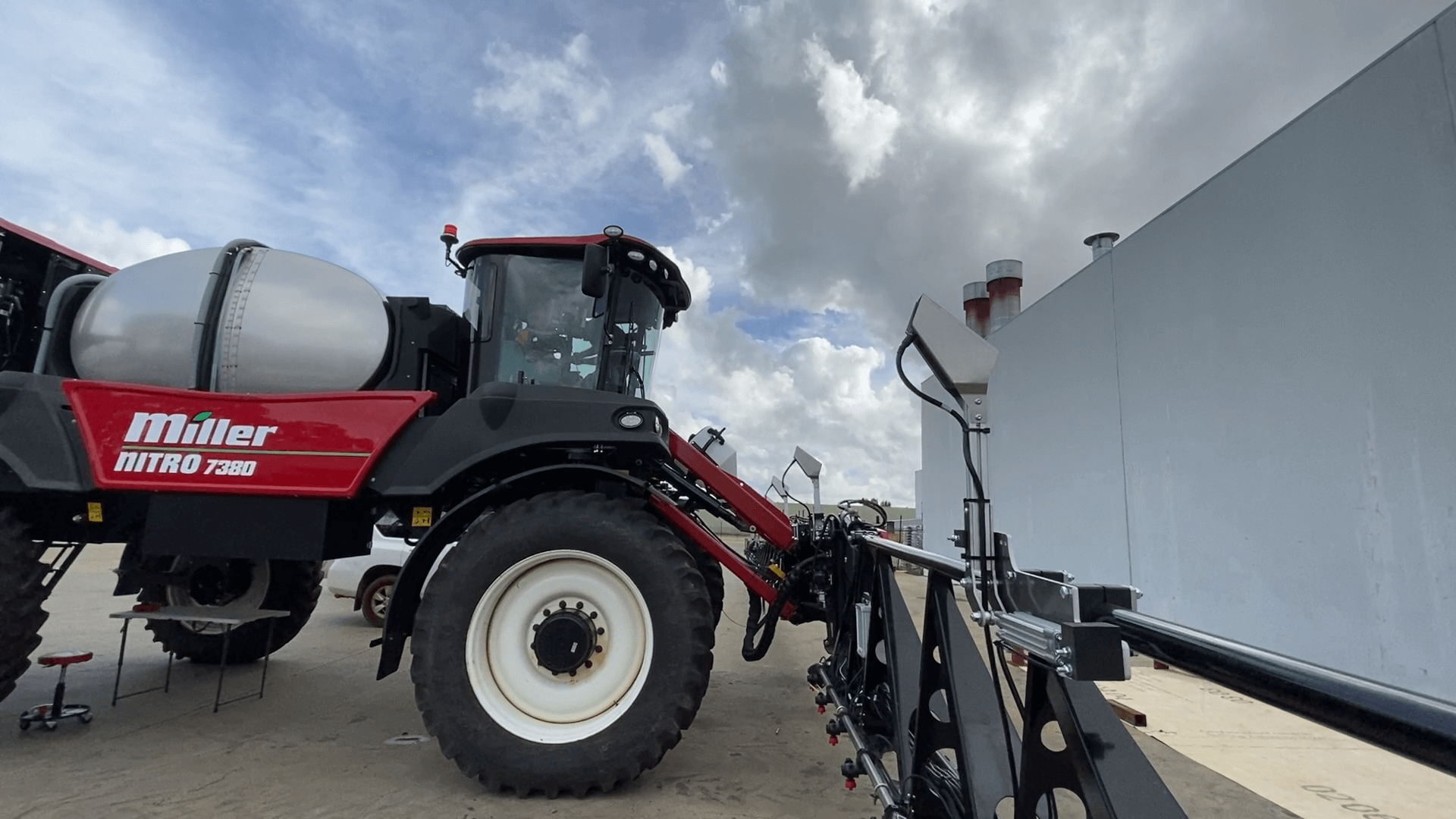 One of the latest green-on-green spot spraying systems inatalled on a Miller sprayer set to be delivered to a northern Wheatbelt grower.


User-friendly operation of some of the most sophisticated application technologies in the agricultural spraying industry has seen a surge in demand for Miller self-propelled sprayers.

Peter Vella, a long-term industry specialist who was recently appointed to the position of National Miller Sales Manager with Australian distributor, McIntosh Distribution, said demand for the brand had been exceptionally strong right across the country since the latest grain harvest.

Now, despite winter cropping areas being on the cusp of another season, Peter said he continued to be pleasantly surprised by the level of new enquiry and quotations, with growers locking-in machine deliveries from July through to the end of this year.

He said the Miller sprayers had been snapped-up for use with various applications, including irrigated agriculture in eastern States, traditional summer spraying and, more recently, for pre-seeding applications. In WA, spraying activity has increased in recent weeks, particularly in the Esperance region.

After sitting in the cab of a Miller Nitro 7000 Series sprayer soon after taking on his new role, Peter has since been spraying as well and he said one of the most impressive aspects of operating the machine, despite the array of application technologies and systems available, was its ease of use. 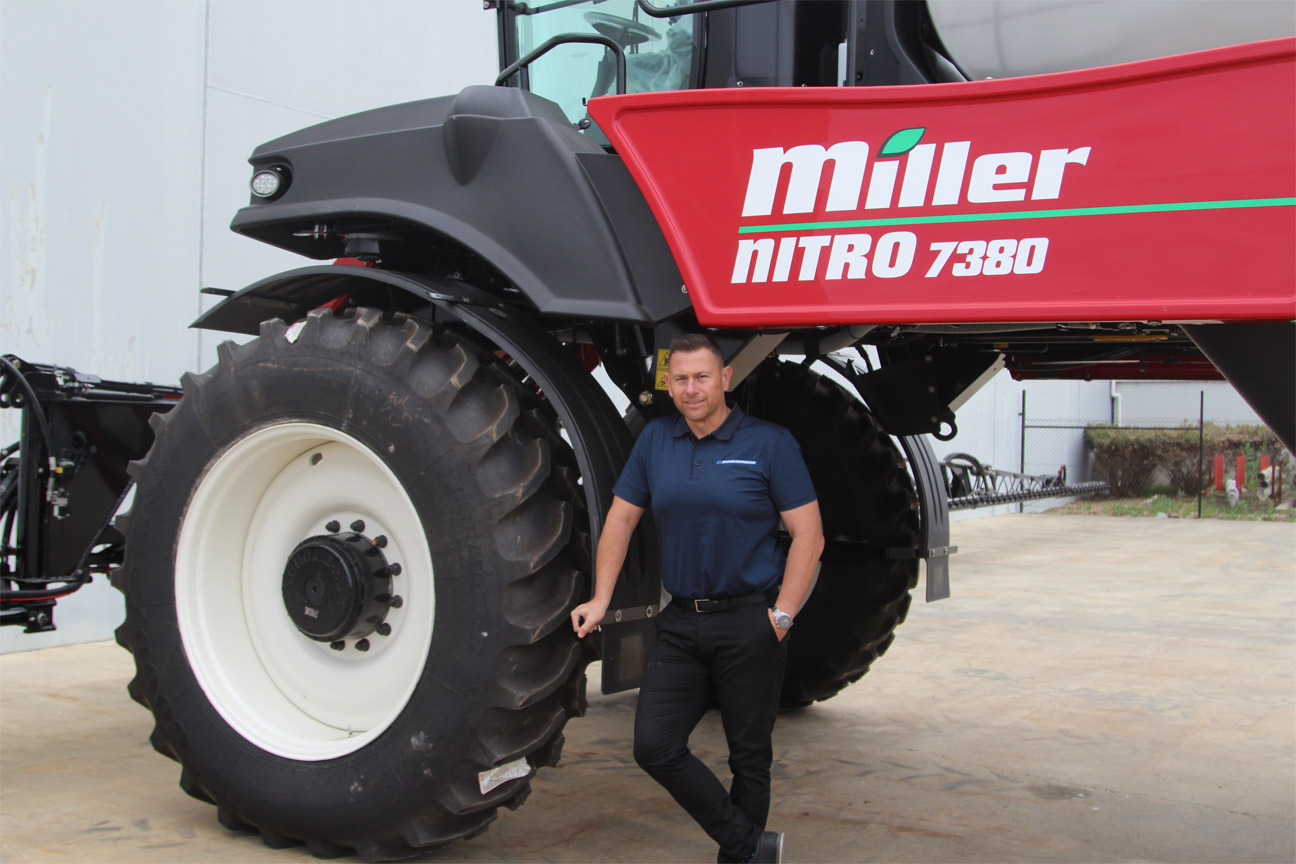 “It really is so easy to use, especially now with features like the latest one-touch auto-folding,’’ Peter said.

“The old ‘keep it simple’ formula has certainly applied with all the latest developments. There are not too many things you have to do to go spraying and it means it is easy for multiple operators. Experienced and inexperienced operators will find it simple and easy to understand.’’

An innovative hydrostatic Danfoss pump system featuring electronically-controlled variable displacement piston drive motors and integrated Fairfield Torque-Hub planetary final drives are responsible for the improved drive performance. The drive motors supply greater torque at all speeds, while the weight distribution has been carefully designed to ensure it remains within 4 per cent of 50:50 balance during spraying.

The complete chassis and suspension system on the latest sprayers was purposely designed with added strength for the Australian market and four-wheel steer is available for those who need to track on a singular tyre track to avoid issues. Local tyres are selected for excellent flotation and reduced compaction.

Factory Miller boom widths range from 27 metres to 41.5m, but growers also have the option of a 48m Pommier aluminium boom, which has become increasingly popular.

Peter said the Miller Spray-Air platform was another option attracting strong interest again, largely due to recent crop sizes and with growers looking to further improve their coverage.

With the continued rising costs of Glyphosate and chemical inputs, Peter has said the popularity selective spot spraying technology has increased substantially.

In addition to WeedSeeker 2 reflected light technology, the latest spot spraying option with the Miller sprayers is the Bilberry “Green-on-Green’’ weed identification system.

The high speed, high definition cameras are installed at 3-metre intervals along the booms to scan paddocks and the company’s weed recognition algorithms are constantly evolving to ensure specific weeds are precisely targeted with the appropriate herbicide in real time.

The technology is used in wheat, barley and oat crops and also is set to be available for lupins in the upcoming season, followed by broadleaf break crops and pastures.

Blue lupin is expected to join the broadleaf weeds currently identified for Green-on-Green applications, while grass weeds in some broadleaf crops could be added in 2023.

Green-on-Green trials with the Bilberry Intelligent Spot Spraying System have shown an average hit and kill rate of 80 per cent, as well as chemical savings of up to 90%.

The system fully integrates with Miller’s electronics and is available on the Miller truss booms up to 41.5m and the 48m Pommier boom. The full integration also allows users to easily change from spot to blanket spraying.

In addition to the hardware investment, growers pay a subscription to the Bilberry Intelligent Spot Spraying System either per hectare or on an annual basis with unlimited hectares. This also incorporates all software updates and performance improvements.

A limited number of the Bilberry systems have been available with Miller sprayers for the upcoming season, however it has not stopped strong early interest. Several systems are on their way to growers in the northern and eastern wheatbelts, while further systems have headed over the border to South Australian growers.

For further information on the Miller range and various application systems available with the sprayers, growers can contact their local Miller dealer.