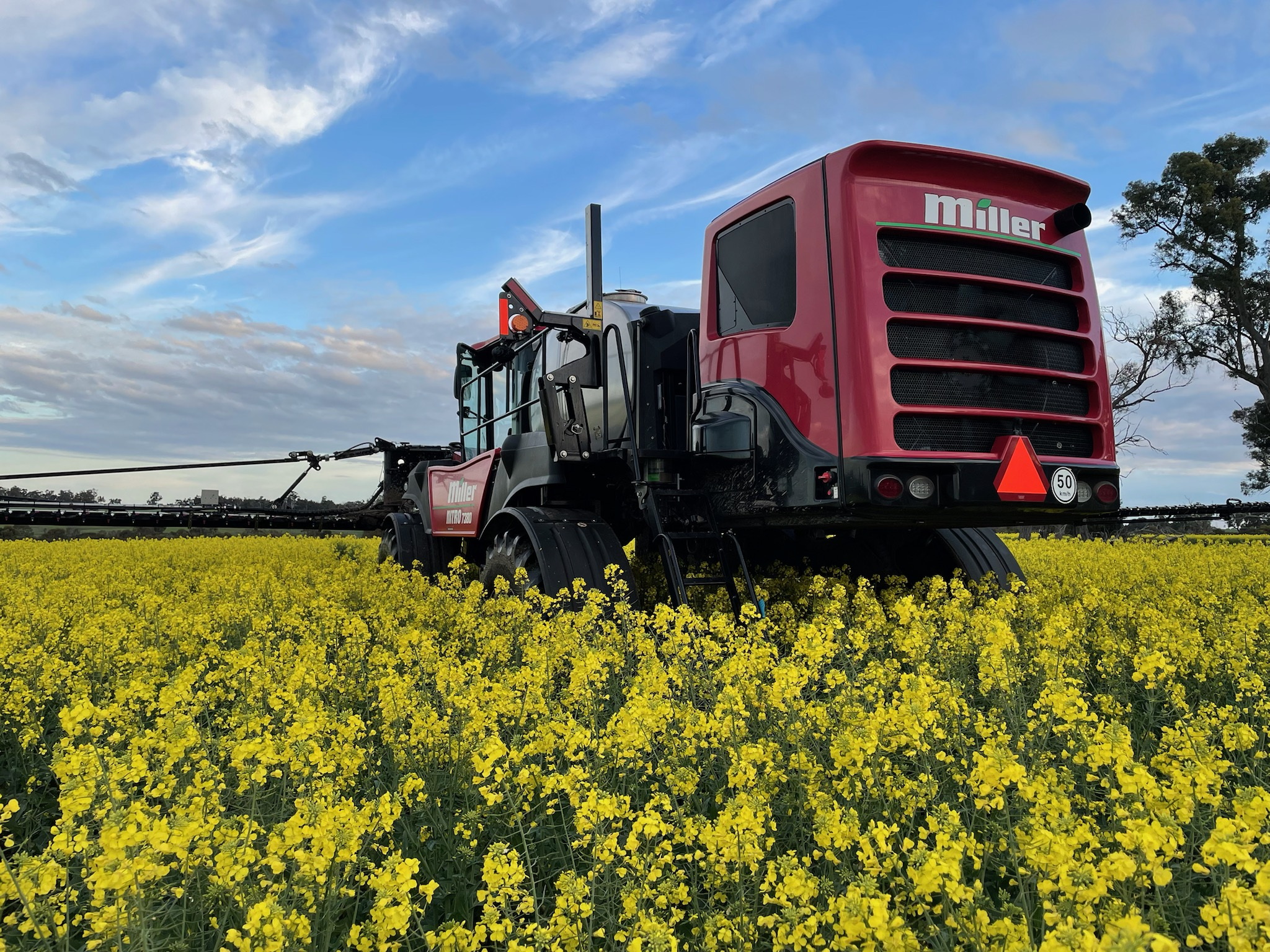 The extra crop clearance provided by a new Miller Nitro 7380 sprayer has been welcomed by the Warburton family at Kojonup for clearing canola flowers when targeting sclerotinia disease in crops and pods during desiccation.


A NEED for greater crop clearance when spraying flowering canola to control sclerotinia disease saw an addition to the Warburton’s Miller sprayer family near Kojonup this season and it came with the bonus of a host of other benefits.

Rob Warburton said the canola can be "six-foot" (183 centimetres) when they target the sclerotinia and this was too difficult to clear for their existing Miller Nitro 4315 sprayer, which also hits canola pods during desiccation.

However, the height proved no problem for their new Miller Nitro 7380 sprayer, which offers clearances up to 193cm depending upon tyre sizes.

"The extra clearance was great and we could see the flowers going underneath," Rob said.

They haven’t parted ways with the smaller 4315 sprayer however. It still played a valuable role this season at seeding and for swathing.

"We do a lot of spray-topping when we are swathing and we can be swathing and harvesting at the same time, even though we mostly direct head (canola) now."

Rob and his wife, Jen, operate the 6000-hectare ‘Korellup’ property near Kojonup, cropping 3500ha to canola, wheat and barley whilst running an 18,000-head Merino flock.

Half of the cropping program is devoted to canola and 70 per cent of the area is continuously cropped, following a canola-cereal-canola rotation.

Rob said typically five to six spray passes would be undertaken over paddocks to control mainly weeds and diseases.

He said annual ryegrass was the major weed targeted, with some resistance to glyphosate emerging, however most herbicides continued to be effective on their weed populations.

The Warburtons also have been long-term users of chaff carts at harvest to help limit weed seedset, and which have proved valuable to sustain the sheep flock, especially during autumn.

Despite the wet conditions this season, Rob said the new Miller Nitro 7380 sprayer, delivered by McIntosh & Son at Katanning in March, had been highly impressive.

"We are tramline farming and we have bogged a little bit lately, but it has managed to get through."

"The traction control has been very good and it has heaps of power." 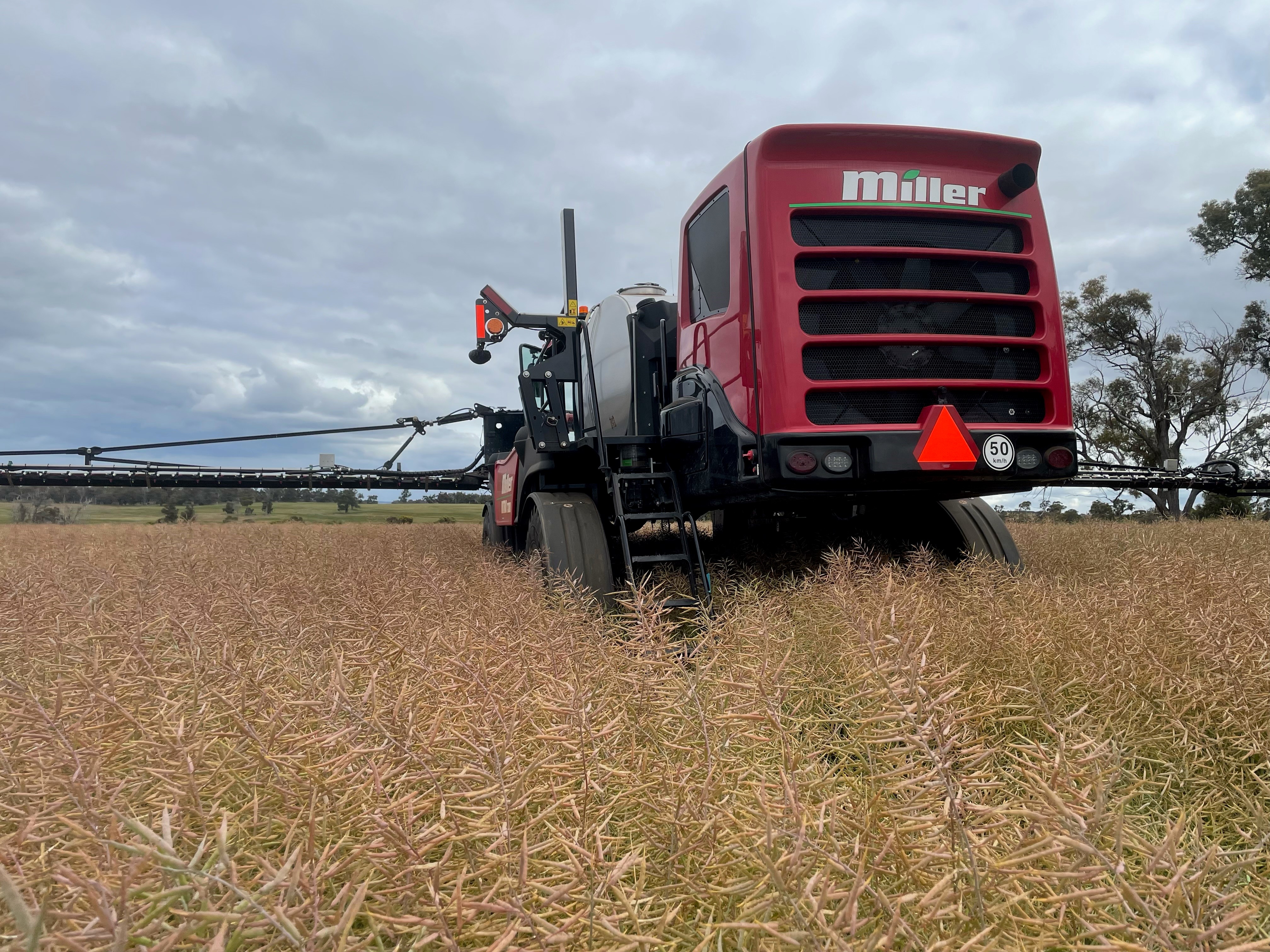 An innovative hydrostatic Danfoss pump system featuring electronically-controlled variable displacement piston drive motors and integrated Fairfield Torque-Hub planetary final drives has enhanced the drive performance. The drive motors supply greater torque at all speeds, while the weight distribution was carefully designed to ensure it remains within 4pc of 50:50 balance during spraying. This package of power, control and balance leads to a great overall experience.

"Due to it being so wet, the weight distribution has been very important. The even distribution from front to back is excellent," Rob said.

"With the stability and flotation, it’s incredibly smooth. You have to watch it because it’s so comfortable – you can really tear it into rough country and it just cruises over it."

He said there also had been a big change in the fuel consumption compared with the old 4315 model.

"The difference is amazing. I only fill it up every couple of days. With the old one, we were using about 1 litre per hectare and we are now down to around 600mL (millilitres/ha), so we are using 40pc less fuel easily."

Rob had always liked the fact the engine was at the rear with the renowned, front-mounted Miller sprayers and further reductions in noise levels with the latest machines was another bonus.

“At full noise with the old 4315, you couldn’t stand next to it, whereas this latest one is like a tractor idling. The engine only runs at 1800 RPM and it just ticks away. It’s a beautiful machine with a comfortable cab and is just so quiet.

"The new CANbus system works really well too and the fact you can do everything at the pump downstairs and it’s already on the screen when you get in the cab is great – and it stops stuff-ups."

The Warburtons spray at speeds mostly around 20 kilometres per hour and after enjoying the Raven XRT high resolution height control system and one-touch auto-fold feature with the Miller Nitro 7380 this season, Rob now considers these items "a must" for spraying.

"You can set the height control at 800 millimetres above the canopy and it just sits there. With the old sprayer, we had to lift the boom right up and just go with it. The auto-fold saves having to worry about a few buttons and watching it," Rob said.

He said an auto-greaser they added as an option was another fantastic feature.

Rob said in the first season for their Miller Nitro 7380, they also had received strong support from McIntosh & Son at Katanning.

"We had a couple of boom issues early on, but these were diagnosed and fixed. Both the Katanning and Albany teams (of McIntosh & Son) are very good. They are quick to respond to everything."

Meanwhile, the Miller sprayers also are now set to be available with the option of green-on-green spot spray technology. For further information on this latest development and the Nitro 7000 Series, growers can contact their nearest dealer.